How to Use Social Media to Strengthen Romantic Relationships

Where do we go for a date night? Couples need great date ideas to keep their relationships fresh and romantic. PearHaven’s website features, including the Date Wizard, help couples find, record and share memorable date ideas. 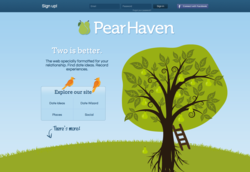 You can look at the date ideas of other couples, and if that doesn't give you an idea, then the date wizard can make one for you!

David Lackey, founder and president of PearHaven, today announced a party celebrating the launch of PearHaven (http://www.pearhaven.com). PearHaven provides an innovative new approach to relationship building; harnessing social media in a way that strengthens the bond between romantic partners. The party will be held as an official event during SXSW Interactive, and occurs on Saturday, March 10th from 5:00pm – 8:00pm at the Madison, 307 West 5th Street, Austin, TX 78701.

David Lackey created PearHaven as a website that “revolves around couples rather than individuals."

While still a student at Princeton, Lackey realized that couples did not have an internet facility for coming up with date ideas. The concept came to fruition the following summer.

Lackey says, “As the concept started to grow into a reality, the PearHaven team began to discover that what mattered most to dating couples was finding new date ideas. Couples would often be limited to going to the same places just because they weren’t aware of other great date spots. We conducted a market research survey with about 200 participants and found that 80% of people from exclusive relationships said that finding new things to do was difficult. We shifted to make this our primary pursuit.” According to Lackey, “It should be easy as saying ‘we want to see that new action film and then eat at a Mexican restaurant.’ With our Date Wizard, it’s just that simple. The almighty wizard maps out different theater-restaurant combinations that will make a great movie and dinner night."

Lackey understands the market demand for social networks inside the current landscape, where couples enjoy sharing content related to their relationships. PearHaven provides a place within the social network sphere for such relationship-focused expression; a spot where couples can share pictures, experiences, and other collaborative content from their relationships’ histories. “It’s fun and easy for a couple to record dates that they have been on. Went to the park and then got ice cream? Tag those places and you have a date idea. Consequently, users have access to all of these great date ideas from couples that they would have never known about before,” said Lackey.

PearHaven will celebrate its launch on Saturday, March 10th as part of SXSW Interactive from 5:00pm until 8:00pm at the Madison, 307 West 5th Street, Austin, TX 78701. RSVP through Eventbrite, if you're interested in attending the launch party.

PearHaven provides an innovative new approach to relationship building, harnessing social media in a way that strengthens the bond between romantic partners.