Nesting season for birds is right around the corner. With it, homeowners and facility managers will be dealing with pest bird problems and looking for solutions. Ornithologist Dr. Rob Fergus weighs in on Ultrasonic Bird Control Devices to warn consumers during this time that ultrasonic devices do not repel birds. Dr. Fergus specializes in urban bird control and effective, humane solutions. 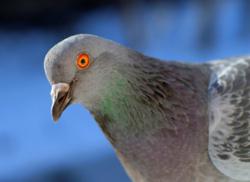 Companies that sell bird deterrent products often refer to this time of the year as bird season and anticipate business to pick up as birds choose to nest under eaves, in vents, gutters, rooftops, and other areas.

Just as any other industry, there are opportunists out there looking to make a quick buck on "bird season" by selling ultrasonic devices to repel birds. Companies make exuberant claims about how their unit can repel birds with high frequency noises, but there is just one problem, birds hear on the same level as humans and not not hear ultrasonic bird deterrent devices.

Sometimes hardware or lawn & garden companies advertise ultrasonic devices that are supposed to drive birds away with high frequency noises undetectable to humans. Sounds like a good idea, right? Blast out sounds birds can hear but we can’t—what’s not to like?

Unfortunately, the truth is that birds do not actually hear these ultrasonic sounds any better than humans do, and there is no scientific evidence that these devices actually work. The bottom line is that birds cannot hear ultrasonic frequencies and ultrasonic devices don't work.

Humans hear sounds between the frequencies of about 20 to 20,000 acoustical vibrations per second (hertz or Hz). Middle C is about 262 Hz and the highest piano key (C8) is about 4186 Hz. As you get older, you lose the higher frequency sounds; middle-aged people can often hear sounds only up to 12,000-14,000 Hz (12-14kHz). High frequency dog whistles work because dogs can hear sounds up to 40-60 kHz. Bats use sounds up to 100 kHz to help them locate their flying insect prey and avoid obstacles in the night sky.

Birds, on the other hand, usually hear best between 1-5 kHz, with total hearing between .5 and 8 kHz. There is a huge amount of variation between species. Some songbirds—especially those with high pitched songs—can hear up to about 20 kHz. There are some discrepancies in studies of the upper limits of bird hearing, but in the most recent tests, no birds have been shown to hear frequencies above 20 kHz. Even birds like oilbirds and swiftlets that are known to use sound for echolocation in dark caves only use audible sounds between 1 and 15 kHz. For this reason, ultrasonic devices using frequencies between 15-30 kHz are completely ineffective save for a few songbirds.

While birds may not hear higher frequency sounds any better than people do, a few including pigeons and owls may actually hear lower frequency sounds better. In 1979 researchers discovered that some pigeons can hear sounds as low as .05 Hz. That’s the kind of low infrasounds created by earthquakes, winds over distant mountains, or waves on distant shorelines. Some researchers have speculated that these birds can use these distant sounds to help them maintain a general sense of direction.

So before you buy an ultrasonic bird scaring device costing several hundred dollars, remember this general rule: most birds hear about as good as you do—even with your middle-age hearing loss!

About Dr. Rob:
Dr. Rob Fergus is an ornithologist who specializes in urban bird conservation, urban ecology and human/wildlife interactions.

He received his Ph.D. in urban bird conservation from the University of Texas at Austin. After founding the Hornsby Bend Bird Observatory in Austin Texas, he created additional bird conservation programs and became the first executive director of the 2,500 member Travis Audubon Society.

In 2004 he moved to suburban Philadelphia where he was the Senior Scientist for Urban Bird Conservation at the National Audubon Society until 2009. In addition to researching and consulting on human/bird interactions in cities across the United States, Latin America, and Europe, Dr. Fergus currently teaches at Rowan University in Glassboro, New Jersey, and Rosemont College in Philadelphia, Pennsylvania.

Dr. Rob has teamed up with Bird-B-Gone to help answer your bird questions and help bridge the gap between the science of nature, and the nature of bird control.

Get answers on specific pest bird problems, bird habits, bird behavior and more. Fill out the form below or email Dr. Fergus directly and he will email you a personalized response.