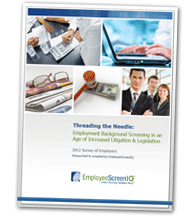 The 2012 EmployeeScreenIQ trends report is now available to download

A new survey from EmployeeScreenIQ looks at the ways companies interpret and use background screening results to make hiring decisions in a time of rapidly evolving federal and state employment laws, increased enforcement by the EEOC and escalating litigation, including an explosion of "failure to hire" lawsuits.

The 2012 edition,"Threading the Needle: Employment Background Screening in an Age of Increased Litigation and Legislation" indicates that HR professionals are responding thoughtfully and responsibly to adverse background check results despite growing challenges regarding their use – and in some cases, misuse. The 20-page report examines a variety of topics ripped from the headlines, including the impact of criminal records on hiring, the use of social networking in the screening process and the legitimacy of online universities.

The survey also included two hypothetical hiring scenarios inspired by public figures, although their true identities were hidden from respondents. Based on what each individual's background check might reveal, over 90 percent of survey respondents said they wouldn't hire controversial actor Charlie Sheen and 84 percent of respondents would not hire U.S. Vice President Joe Biden, who famously exaggerated his educational qualifications.

More than 650 individuals from a wide range of U.S. organizations that use employment screening firms completed the survey in late 2011. It's available for complimentary download by visiting: http://www.employeescreen.com/whitepaper_threading-the-needle.asp

Among the top findings:

"The need for employers to protect their interests has never been greater, as employment laws continue to evolve in profound ways and as the impacts of litigation to a company's reputation and bottom line can be catastrophic," says Nick Fishman, chief marketing officer of EmployeeScreenIQ. "They must continue to strike a balance in this atmosphere of amplified legal risk—walking a fine line between insulating themselves against lawsuits while somehow managing to conduct background checks in an acceptable and legally compliant manner."