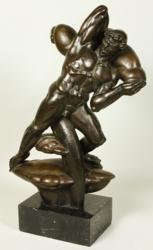 Kaminski Auctions of Beverly, Massachusetts is pleased to offer several Albert Wein bronzes in its upcoming March 25th Modern auction. Wein had an illustrious career winning many awards for his sculpture and paintings, in addition to many important commissions.

Albert Wein at a young age studied an academic course of study that was grounded in classicism at the Maryland Institute. He furthered his studies at the National Academy of Design in New York under the painter Ivan Olinsky.

In 1932 he entered the Beaux-Arts Institute in New York where he furthered his artistic education in sculpture, studying under some of the most prominent sculptors of the time, specifically, Hans Hofmann, who was at the forefront of the modernism movement.

In 1947 he won the Prix de Rome scholarship and left the United States to study at the American Academy in Rome. He traveled extensively at that time and was greatly influenced by the classical sculpture of Greece and Rome.

In 1975, he was commissioned to create North America's largest granite relief; A 27 ft x 27 ft. granite relief on Libby Dam which is located in Montana.

These wonderful sculptures on offer at the Kaminski sale were an important part of the exhibition "Albert Wein American Modernist" in 2008 at the Boston Atheneaum. A color catalog is available for this auction, for more information and to view the entire catalog online please go to http://www.kaminskiauctions.com.