Current Tablet Owners are More Likely to Buy the New iPad, According to TechBargains.com Survey

TechBargains.com's Survey Reveals Who Will Buy The New iPad and When 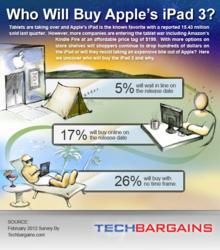 "Who Will Buy Apple's iPad 3?" Infographic

TechBargains.com, a leading deal aggregation website for electronic products, released its new iPad survey results, revealing that a surprising 48% of those surveyed will buy the new iPad. Of the respondents, 58% want to upgrade their current tablet and 74% concede that no tablet compares to an iPad. The anticipated high price tag of Apple’s new iPad is the main reason 16% of shoppers will not buy the new iPad and why 36% remain undecided. The survey also found that more than half of owners of the recently released Kindle Fire will buy the new iPad.

“When it comes to tablets, Apple’s iPad will continue to remain the leader,” said Yung Trang, President of TechBargains.com. “But what’s very interesting is that Kindle Fire was released just three months ago and yet more than half of Fire owners already know that they will, in fact, buy the new iPad. This could be a commentary on consumer dissatisfaction with Amazon’s product or simply a message that the iPad’s user experience remains unparalleled.”

iPad & iPad 2 vs. the New iPad
Of the survey respondents 66% of iPad owners and 56% of iPad 2 owners plan to purchase the new iPad which indicates consumer’s strong Apple loyalty and the eagerness to have the latest products available. Additional survey results indicate:

Techbargains.com’s infographic illustrates who will buy Apple’s new iPad and a complete list of the survey results can be found here. Helpful resources for consumers are just a click away with video clips on Techbargains.com’s YouTube channel that focus on product reviews, product deals, gadget giveaways and seasonal shopping tips.

About TechBargains.com
Founded in 1999, Techbargains.com is a deal aggregation website that combines unbiased expert hand-curation and a real-time price/value discovery algorithm. TechBargains uses this technology to highlight the best deals and coupon codes on the Internet each day. Over $150 million worth of products were sold via TechBargains.com over the last year. 80% of the people that visit the site are repeat visitors and they give TechBargains.com a 98% customer satisfaction rating. TechBargains is actively pursued by manufacturers based on the quality of channel and sales achieved. The company is a top partner to Dell, HP and NewEgg. For more information visit http://www.techbargains.com or join the conversation on Twitter @techbargains or http://www.facebook.com/pages/Techbargainscom/33983412764