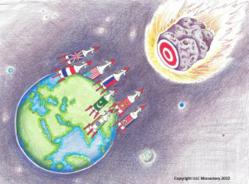 How will history record us, if there are no historians left to write our legacy?

The Monastery, a branch of the Universal Life Church, today called upon the Obama Administration to undertake a policy to lessen the aggressive dialog worldwide regarding the proliferation of nuclear missiles (ICBMs). The move was made given the escalating rhetoric of politicians to bomb the Iranian government for its entry into the nuclear family.

In the letter, G. Martin Freeman, the Presiding Chaplain, references recent news about a potential asteroid impact, and asks "How much time do we have? How will history record us if there are no historians left to write our legacy?" He goes on to say "Will we do nothing to save mankind? Or will we join together to protect civilization?"

Previously, the Church has been noted for its communication with the White House, in denouncing the Department of Defense implementation of "Don't Ask, Don't Tell," a controversial policy that was later repealed.

Recently, the New York Times stated "the popular Universal Life Church Monastery, based in Seattle, says its ordinations have surged from fewer than 98,000 in 2007 to more than 150,000 last year." The Monastery is an online non-denominational church that also embraces the causes of survival, compassion, and concern, as part of its doctrine.

For more information about the Universal Life Church Monastery, go to their website at http://www.themonastery.org/