The Flames Sports Network has recently been recognized for excellence in its television broadcast of Liberty University Athletics with the network collecting a pair of Telly Awards. 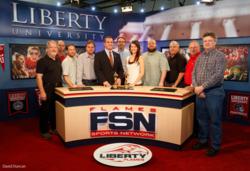 The Flames Sports Network has recently been recognized for excellence in its television broadcast of Liberty University Athletics with the network collecting a pair of Telly Awards.

The Flames Sports Network (FSN) received Telly Awards for their production of the Flames SportsDesk show and the network’s coverage of Liberty’s Big South Championship football game against Stony Brook on Nov. 19, 2011.

“It is indeed an honor to have our efforts recognized by such a prestigious organization as the Telly Awards,” commented Bruce Carey, Athletics TV producer for Liberty. “To have two of our productions honored is a tribute to the support we have received from the athletics staff, university administration and our entire crew of trained and seasoned professionals.”

“This award is a team award and involves an experienced crew of technicians, and talented announcers who take a great deal of pride in their work and desire to give the glory to God each and every game,” continued Carey.

The Telly Awards were founded in 1979 and is the premier award honoring outstanding local, regional and cable TV commercials and programs, the finest video and film productions, and online commercials, video and films.

“Everyone understands that we aspire to win championships in athletics at Liberty University and our desire to excel reaches into all areas of our program,” said Jeff Barber, Liberty’s Director of Athletics. “This recognition for our athletics television production fits right in with those desires.

“The University has provided us with the resources which allow us to create high quality programming, but it certainly takes the people we have on our Flames Sports Network crew to put it all together,” continued Barber. “As our athletics TV producer, Bruce Carey has exhibited a passion to reach as far as we can and he has assembled an outstanding crew of talented experts who are being recognized with this award.

“We have many plans for the future that will stretch the capabilities of this talented crew in order to provide our Flames fans with great opportunities to see their teams perform no matter where they are in the world. FSN will continue to be one of the best production crews on college athletics.”

The Telly Awards judging panel includes more than 500 industry professionals, each of who are previous award winners. The council evaluates entries to recognize distinction in creative work. Entries do not compete against each other, but rather entries are judged against a high standard of merit.

At its annual awards ceremony in June, the 33rd annual Telly Awards will present the Flames Sports Network with a pair of Bronze Telly Awards.

The Flames SportsDesk is a weekly magazine style television broadcast, showcasing the accomplishments of Liberty Athletics, both on and off the field of competition.

The 30-minute show is hosted by Alan York, the radio “Voice of the Flames”, and Erin McKeown, FSN volleyball announcer and the host of the FSN football pregame and halftime shows. The Flames SportsDesk airs weekly around the country on the Liberty Channel, MASN and CTN-Florida.

FSN’s second Bronze Telly Award was given to the crew for their work in broadcasting Liberty’s football matchup against Stony Brook on Long Island. The November game, played at LaValle Stadium in Stony Brook, N.Y., was the first-ever television broadcast of a Big South championship football game with a FCS Playoff bid on the line.

Liberty University, located in Lynchburg, Va., is the world’s largest Christian university. More than 12,000 students attend classes on its 6,500-acre residential campus and more than 70,000 study in its thriving online education program.