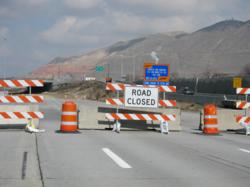 The primary purpose of all roadside barriers is to prevent a vehicle from leaving the traveled way and striking a fixed object or terrain feature that is considered more objectionable than the barrier itself.

These new LCDs exchange hazardous concrete with more forgiving materials: plastic and water. They absorb impact and deform, protecting travelers from the high G-forces of concrete barriers, which are essentially brick walls.

Testing conducted under the auspices of the National Cooperative Highway Research Program has shown that vehicle impacts with LCDs generated roughly half the G forces of impacts with concrete barriers. Not surprising when you consider that LCDs were developed by the Federal Highway Administration (FHWA), which regulates work-zone safety through its manual of industry standards, the Manual of Uniform Traffic Control Devices (MUTCD).

Despite their acceptance into the MUTCD standards, LCDs continue to be ignored throughout the industry. In fact, many states have prohibited the use of LCDs and exclude them from their regulatory guidelines. The New Product Committee of the Arkansas State Highway and Transportation Department has failed to approve such devices. Their colleagues in Arizona removed them from a list of approved products. Indiana, Kansas, New Jersey, Oklahoma, South Carolina and Wisconsin have restricted the use of LCDs.

The Bureau of Labor Statistics reports that 40,000 workers and travelers were injured in construction-zone accidents in 2007 and 831 were killed. And while work-zone accidents represent a perilous situation for both drivers and workers, the risk is skewed toward the traveling public.

Studies from the Bureau of Labor Statistics found that 85 percent of those killed in construction-zone accidents are motorists and their passengers. Construction workers, it seems, are well protected. But their protection comes at the expense of motorists.

One contributing factor is concrete barriers or “jersey barriers.” Roughly three feet tall and featuring an angled base leading into a rectangular upper portion, concrete barriers were developed at the Stevens Institute of Technology in Hoboken, New Jersey, hence the nickname. The New Jersey State Highway Department first used them to redirect traffic around work zones in 1955, and they’ve been the standard for the industry ever since.

And therein lies the problem. While all other aspects of transportation infrastructure have taken on modern adaptations, construction barriers still employ a technology developed six decades ago.

To be more precise, the problem lines in the blanket application of concrete barriers. In work zones where positive protection is required to keep vehicles on the roadway, concrete barriers placed parallel to traffic provide a suitable solution. But where barriers are not needed, and only a gating barricade is needed to delineate traffic patterns, safer and more suitable alternatives are available.

In its Roadside Design Guide, the Task Force for Roadside Safety states that “the primary purpose of all roadside barriers is to prevent a vehicle from leaving the traveled way and striking a fixed object or terrain feature that is considered more objectionable than the barrier itself.”

While keeping vehicles on their designated path of the roadway is an admirable goal, monolithic concrete barriers would seem to be far more objectionable. Consider the story of Don Wayne Teller.

On January 17, Teller was behind the wheel of a 1996 Chevrolet traveling through Las Vegas, Nevada.

According to the Las Vegas Metropolitan Police Department, Teller was headed west on Sunset Road near Hauck Street. The Chevy skidded into a construction zone where it smashed into a concrete “jersey barrier,” officers wrote, projecting the vehicle into a nearby flood-control channel.

Firefighters used extrication tools (“Jaws of Life”) to free 62-year-old Teller from the wreckage. Paramedics then airlifted him to University Medical Center for treatment.

Locals told investigators it wasn’t the first time they’ve seen a vehicle smash into the unforgiving concrete barriers. But Teller can consider himself lucky: he survived. Others have been less fortunate.

Until State DOT's and their consulting engineers adopt safer alternatives that consider the safety of workers and travelers alike, those like Don Wayne Teller will continue to risk their lives when they get behind the wheel.

Blind adherence to tradition may suit certain forces in the transportation industry. But, for the rest of us, it’s a matter of life and death.

FindMyAccident’s single vision is to help those whose lives are affected by traumatic accidents. Drawing expertise from the fields of law, journalism, business and technology, we’ve built a comprehensive resource to help people during their time of crisis. Each member of our core leadership team brings more than 10 years of experience to the table. That knowledge provides FindMyAccident with a unique perspective on several accident types, with an eye on injury recovery, victims’ rights and innovative partnerships.