The 2010 alleged scandal video showing Paramahamsa Nithyananda was sent to four U.S.-based forensic analysis experts. Excerpts and highlights from the reports are listed below. 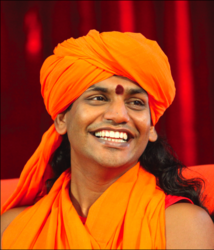 The young enlightened Master Paramahamsa Nithyananda's meteoric rise by untiringly helping humanity to raise in consciousness, invited the ire and jealousy of few vested interests in the Indian media. He became a target of a vicious religious persecution. He became the target of a media frenzy which followed in the wake of the circulation of a defamatory fake scandal video.

The 2010 alleged scandal video showing Paramahamsa Nithyananda was sent to four U.S.-based forensic analysis experts.
All four experts have decades of experience—working with all levels of government and law enforcement and testifying at trial on a number of cases requiring forensic analysis expertise. They have given a professional analysis on the most “scandalous” video excerpt available online and offline. Two of the reports further analyzed the forensic reports commissioned by the Karnataka CID:

David Notowitz – NCAVF
Mr. Notowitz created NCAVF, the National Center for Audio and Video Forensics. He is appointed to the LA Superior Court Expert Witness. Panel, and he is approved by the California State Bar as an MCLE provider, to provide continuing education to attorneys. In the beginning of 2011, David Notowitz was a video forensic consultant for the TV program The Insider.

A rare living Avatar from India, Paramahamsa Nithyananda, has emerged as a compelling spiritual force of this millennium. Working and sharing with over 20 million people worldwide every year, Nithyananda is committed to help humanity make the next big evolutionary breakthrough: into Superconsciousness.

For Paramahamsa Nithyananda's enlightening views of the 2012 Conscious shift to help humanity visit his YouTube/LifeBlissFoundation channel.

Over 30 Vedic temples where ancient Vedic rituals, deities and festivals are experienced by thousands everyday.