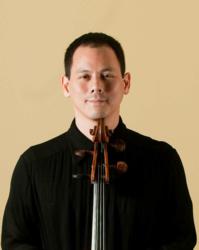 Cellist Bion Tsang will perform Antonin Dvořák’s Cello Concerto in B Minor, Op. 104 with the Austin Symphony Orchestra on Fri., March 30 and Sat., March 31, 2012 at Long Center for the Performing Arts in Austin, Texas.

Tsang’s Hawthorne Series cello was completed in April 2011 and is modeled after a 1740 Stradivarius cello. Tsang selected it for his debut with the Saint Paul Chamber Orchestra last year and has played it exclusively since May 2011.

Internationally acclaimed cellist Bion Tsang will make his Austin solo debut with maestro Peter Bay and the Austin Symphony Orchestra on March 30 and 31, performing on a new cello he acquired from the workbench of Wayne Burak in Arlington, Texas.

Bion Tsang perform Antonin Dvořák’s Cello Concerto in B Minor, Op. 104 with the Austin Symphony Orchestra at 8 p.m. on Friday, March 30 and Saturday, March 31, 2012 at Long Center for the Performing Arts in Austin, Texas.

Tsang’s Hawthorne Series cello was completed in April 2011 and is modeled after a 1740 Stradivarius cello. Tsang selected it for his debut with the Saint Paul Chamber Orchestra last year and has played it exclusively since May 2011.

In his 25-year career as a soloist and chamber musician, Tsang has performed around the world on some of the finest strings instruments. In 2006, he recorded Bach's Cello Suites in Seattle, performing on the 1713 “Bass of Spain” Stradivarius from the David Fulton Collection. Tsang says that wasn’t shopping for a new cello when he invited Wayne Burak to present instruments to his students at the University of Texas at Austin over a year ago. But he fell in love with the instrument, which meant setting aside his antique Italian cello that was a gift from his parents while Tsang was a student at Harvard in the 1980s.

Though he shares a love and appreciation of antique string instruments, Tsang is delighted with this new “voice.”

“My first cello is close to my heart, as it has been with me for so many years and through many, many concerts,” Tsang says. “I didn’t expect to find comparable quality from a new instrument, but after playing a selection of Burak’s cellos, I knew that I had to have one. It has more projection, is easier to play, and as a result, I feel liberated with it.”

In its review of Tsang’s performance of Dvořák’s cello concerto, the Greenwich Times (Conn.) wrote: “While other cellists tend to blemish their expression with mannerisms and clichés, Tsang went to the heart of the music at every moment, following its intent with heartfelt sincerity… His lyric passages were exquisite in color and nuance, his bravura passages always contained musical thought, his timing and sense of drama were flawless.”

To learn more about Bion Tsang’s performance with the Austin Symphony Orchestra or to purchase tickets, please visit http://www.austinsymphony.org/events/bion-tsang-cello/ or http://purchase.tickets.com/buy/TicketPurchase?organ_val=2852&schedule=list.

About Bion Tsang
Cellist Bion Tsang has been internationally recognized as one of the outstanding instrumentalists of his generation: among his many honors are an Avery Fisher Career Grant and the Bronze Medal in the IX International Tchaikovsky Competition. Mr. Tsang earned a 2010 Grammy nomination for his performance on the 2009 PBS special A Company of Voices: Conspirare in Concert (Harmonia Mundi). Highlights of recent seasons include his solo debut with the Saint Paul Chamber Orchestra, a return engagement of Plaza X with Hong Kong City Contemporary Dance Company and a recital appearance with legendary pianist Leon Fleisher. See him online at http://bit.ly/BionTsangVideo and http://biontsang.com.