Educator Charmaine Banther was recognized today for her accomplishments in a special Women of the Year floor ceremony in the State Capitol. 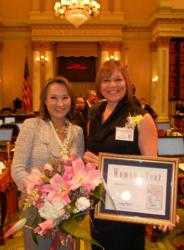 Ms. Banther is a tremendous role model for young women and girls, demonstrating how one person can make a huge difference in both the larger public policy arena and in her local community.

Assembly Member Mary Hayashi (D-Hayward) has named Charmaine Banther as her “Woman of the Year.” A resident of Castro Valley, Ms. Banther is a teacher at James Logan High School in Union City, and is a dedicated advocate for quality public education. She serves as the President of the New Haven Teachers Association and presides as Vice Chair of the California Teachers Associations’ Pacific Asian American Caucus. Ms. Banther was recognized in a floor ceremony today at the State Capitol with other Assembly Member-selected Woman of the Year honorees from across California.

“Ms. Banther is a tremendous role model for young women and girls, demonstrating how one person can make a huge difference in both the larger public policy arena and in her local community,” stated Assembly Member Mary Hayashi. “It’s an honor to have this opportunity to recognize Ms. Banther for her efforts and thank her for all the work she has done for our students and schools.”

Ms. Banther has served in several other leadership roles, including chairing the California Teachers Association Service Center for chapters within Alameda and Contra Costa counties, and as a board member of the New Haven Schools Foundation. She has organized press conferences and rallies at the State Capitol to raise awareness about the needs of students in her district and across California. She is also leading the steering committee for a proposed parcel ballot initiative in her city, which will raise the necessary revenues for public education to offset the effects of budget reductions.

“I am honored to be recognized as the Woman of the Year by Assembly Member Mary Hayashi,” said Ms. Banther. “Her commitment to public education, her constituents, and to our community is highly commendable. I sincerely appreciate this prestigious award as it is a symbol of the years of advocacy on behalf of my students and the profession of teaching.”

Born in Oakland, Ms. Banther grew up learning Cantonese as her first language through her grandmother, and did not learn English until she was in pre-school. Education became her passion early on, as a student attending public schools in San Lorenzo and Newark. She has a Bachelor’s degree in Computer Science from California State University East Bay, where she later earned her teaching credentials.

Ms. Banther’s service to her community extends beyond her work with California Teachers Association. She has partnered with the local fire department to organize CPR classes and annual toy drives to support the community where she teaches. She has partnered with the non-profit organization, K to College, which brings free school-supplies to children in need around the Bay Area. In addition, Ms. Banther chairs the Union City Relay for Life event, sponsored by the American Cancer Society.

The Woman of the Year award began in 1987 as a way for the California State Legislature to celebrate Women’s History Month. Each year, every Assembly Member is invited to select a woman to receive this award, and they gather together at the State Capitol to honor their accomplishments in a ceremony on the Assembly Floor.

Assembly Member Hayashi is the Chair of the Business, Professions, and Consumer Protection Committee and serves the 18th Assembly District, which includes San Leandro, Hayward, Dublin, most of Castro Valley and Pleasanton, and a portion of Oakland, as well as the unincorporated areas of Ashland, Cherryland, San Lorenzo and Sunol.