Fresh off of their 2012 win in Cannes, France at the MIDEM OFF Competition, Serbian jazz band EYOT has been invited to perform in May at the Vicenza Jazz Festival in Italy, alongside such greats as Dominic Miller, Ron Carter and Kenny Barron. 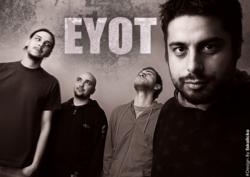 EYOT has made an emphatic and impressive recording debut.
- All About Jazz

Serbian jazz quartet EYOT will join Ron Carter, Dominic Miller, Stefano Battaglia, Kenny Barron and other acclaimed international jazz bands in Italy at the 17th annual Vicenza Jazz Fest in May 2012. The four brilliant young Eastern European musicians will perform their jazz fusion on May 5 and May 6, 2012. EYOT is supporting their 2011 album Horizon with an international tour that has already stretched across Europe, and to the United States.

EYOT's new DVD is available for pre-orders from the band's website, and will be distributed in the United States by Ninety and Nine Records in New York City. The following is a preview of the concert-length video. Live in Nish Preview

Within the chiaroscuro between east and west, good and evil, members of the band EYOT spin a web of hushed tones and howls with their new brand of eastern jazz. All About Jazz did a recent review of EYOT's debut album here: AllAboutJazz Review

This is the music of ancient civilizations, of traditional moonshine, of dervishes and religious festivals. It is the music of blood running through the streets and of hatred. It is the music of love, reconciliation, friendship and peace. It is the marriage of east and west, and the meeting of ancient and modern. The twisted steel of the musical arrangements in EYOT's first record have earned them ebullient praise from critics, and their live shows cannot be missed. The intensity is palpable.

EYOT's new DVD "Live in Nish" is available for pre-order from their website http://www.eyotmusic.net