PanemPropaganda.com offers fans of the Hunger Games book and blockbuster movie series a blend of merchandise, fiction, and fun. 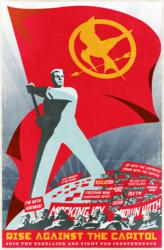 The site offers a host of propaganda style prints inspired by the Hunger Games trilogy.

It's amazing to see the response from fans to the site, especially the positive reaction from students and teachers. The Hunger Games books have really engaged kids to read. And the website is hopefully another extension of that.

PanemPropaganda.com recently launched, creating a place for super fans to immerse themselves in the world of the smash hit Hunger Games and extend the fantasy beyond the books and movie.

The fictional voice of PanemPropaganda.com is the evil Capitol of the nation of Panem, the ruins of what was once North America. The site posts regular stories from the fictitious “Ministry of Propaganda” but is often “hacked” by the burgeoning rebellion.

The site boasts original Propaganda art inspired by the story, hand-drawn Panem maps and a wide variety of Hunger Games merchandise. Dan McCall, the accomplished artist and satirist of LibertyManiacs.com, creates the art for the site.

"We're huge fans, basically writing between the lines of Hunger Games author Suzanne Collins’ world. It's part fan site, part fan fiction. We know there are tons of fans out there who want to totally immerse themselves in the story, just like us, so this has been a creative outlet for that." says Dan McCall of PanemPropaganda.com, “We are offering something different from the other fan sites in that we stay in character, offering fans the feeling that they are actually living within the story, in Panem.”

It's a family affair. McCall's sister, Molly Amberson, is editor and head writer of the site's content under the ‘Games’ name Lollia Grey. Another sister, Emily Greenfield, runs the business end of things.

“It's amazing to see the response from fans to the site, especially the positive reaction from students and teachers. The Hunger Games books have really engaged kids to read. And the website is hopefully another extension of that.” says Amberson “We’re giving fans a way to stay inside the story long after they’ve finished the books or seen the movie.”

The Boston Herald recently featured PanemPropaganda.com’s merchandise in their article, “‘Hunger’ Pangs” – further feeding the appetite for this global juggernaut.

The Mockingjay shirt is PanemPropaganda.com's most popular shirtT-shirt design for PanemPropaganda.com of the Mockingjay, the most popular image of Hunger Games fansFans can immerse themselves in the world of Hunger Games with popular items like this map of the story's fictinal nation of PanemProfessionally hand drawn map of the fictional nation of Panem by artist Dan McCall

The site features "story hacks"by fictional rebels as well as merchandise"Down With The Capitol" is a popular phrase with Hunger Games superfans.

PanemPropaganda.com shipped hundreds of t-shirts the opening weekend of the Hunger Games MoviePopular items include t-shirts with the very unique character names from the book series.The site offers a host of propaganda style prints inspired by the Hunger Games trilogy.Fictional enlistment poster for the Panem "Peacekeepers"