Users of smartphone technology get access to the most current information about renal cancers. 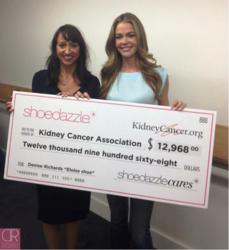 Videos that can be played via these apps include one by Hollywood's Denise Richards, who lost her mother to kidney cancer in 2007.

The Kidney Cancer Association announces the release of its latest app for the iPad 3rd Gen and iPhone 4S.

"The KCA iPhone app is one of the first of its kind for a global charity. It is designed to raise awareness for the nonprofit organization whose mission is the eradication of pain and suffering caused by this disease through research, education, and advocacy," says KCA Vice President for Public Affairs, Carrie Konosky.

"Best of all," Konosky adds, "KCA's iPad and iPhone apps are completely free. It's our hope that families affected by a loved one's kidney cancer will want to learn more about the disease, and that's easily done by using this application."

KCA also has an app available for the Android platform that can be obtained without cost from the Android Market and other websites.

Videos that can be played via these apps include one by Hollywood's Denise Richards, who lost her mother to kidney cancer in 2007. The celebrity's ShoeDazzle designer pump sold out in only two days, raising nearly $13,000 to support KCA research, education, and advocacy activities.

KCA is is a charitable organization made up of patients, family members, physicians, researchers, and other health professionals globally. We fund, promote, and collaborate with the National Cancer Institute (NCI), American Society for Clinical Oncology (ASCO), American Urological Association (AUA), and other institutions on research projects. We educate families and physicians, and serve as an advocate on behalf of patients at the state and federal levels. The organization reaches 70,000 people in more than 100 countries.