Professional dancer/instructor/choreographer Melissa Pastrana won Season 1 of 'Mi Sueno es Bailar' on EstrellaTV Television Network with Los Angeles based dance partner and radio/television celebrity and host Don Cheto. This was the Premier season for Mi Sueno es Bailar -- a “Dancing with the Stars” style format show for Spanish television produced in Los Angeles, California. EstrellaTV is a Spanish-language television network owned by Liberman Broadcasting. The network launched September 14, 2009 and is broadcasted from over 30 major cities throughout the United States. 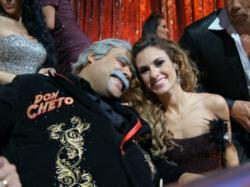 During the three-month celebrity dance competition, Pastrana choreographed and performed 14 magnificent original works with partner Don Cheto taking her and her celeb to the finals and grand prize status. She not only had to choreograph but also instruct her dance partner on each dance before each competition. Fourteen couples opened the show and each week one couple was eliminated and another selected as the winner and candidates to pick the dream for the week. Pastrana worked Don Cheto to his maximum artistic potential sending fans into a voting frenzy week after week During her stay in California, Melissa and Don Cheto amazed fans at other engagements including Premios de La Radio 2011 performing one of their favorite Salsa pieces (dances are available for viewing at http://www.melissapastrana.com, http://www.estrellatv.com/mi-sueno-es-bailar/videos or     http://www.youtube.com/user/canalestrellatv/videos)

Melissa Pastrana, originally from New York, moved to Miami at a young age beginning her life as a performer at local shows and festivals. Within a few years, the young artist had already appeared in nine seasons of Star Styled Dancewear Magazine with Jessica Sutta. Shortly thereafter, she began to dance with Miami City Ballet Company for a period of five years under the direction of Emmy Award Winner, Edward Villella. In 1996 while performing at Belvoir Terrace, Pastrana was favorited by four-time Tony Award Winner, Jerry Zak. Since 2004, Pastrana has been performing for the Florida Grand Opera company where she was casted as the principal dancer in the opera Samson et Delilah and dancer/actor in Turandot, Aida, Manon Lescaut and La Traviata.

Judges for the show included Felix Greco, Andres Garcia, Mariana Seoane and several guest VIP artists. The judges showed no mercy to the talent provoking anger, competitiveness and enthusiasm from the dancers to work harder each week. Among the comments and criticisms directed toward our Miami-based dancer/choreographer Pastrana, Greco complimented her ability to teach well adding “you’re a good instructor, we can appreciate the transitions, the beautiful lines and the lifts.” Don Cheto was thrilled to learn from Melissa raving about his training experience on the show saying: “Melissa is a great dance partner, I’m going to give it all to this competition…I’m grateful first and foremost to Melissa.” In the Fox Trot dance piece, Andres Garcia stated: “Melissa dances marvelously…it was a clean performance” and Seoane was thrilled to see Cheto evolve each week complimenting Pastrana’s achievement in the transformation. Manuel Landeta, one of the VIP judges on the show directed his compliment to Don Cheto adding: “It’s wonderful to see that you’re learning how to dance with this great dancer.” In the closing performance to the new hit Intentalo by America Sierra featuring “El Bebeto”, Greco had but to stand on the judges’ table and bow down to their ingenious comic choreography recapping all the mishaps during the show by other contestants.

Melissa Pastrana is currently working in Season 2 of 'Mi Sueno es Bailar' television show which started filming in Burbank, CA this month and airs for the first time Wednesday, March 28, 2012 at 7:00pm E.S.T. on EstrellaTV. Her Season 2 celebrity dance partner is actor Hector Soberon (check your local TV listings for channel). Fans and supporters are invited to join Pastrana in personally making a dream come true by making a financial contribution to Melissa Pastrana's fund to help someone and their dreams on 'Mi Sueno es Bailar' Estrella TV. Information about where and how you can make a contribution is available at: http://www.indiegogo.com/MelissaPastranaCAMPAIGN-MiSuenoEsBailar-EstrellaTV. As Melissa shares with her audience, “I want to make someone’s dream possible in a very personal way. Won’t you join me make a difference in someone else’s life?”