THERE was a collective “phew!” from the offices of Delta Security. Not only was their driver ok, but the van was secure too! Ralph Morton, Business Car Manager, takes a look at the story in full. 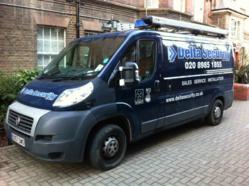 Roger Hirsch had been minding his own business in slow moving traffic when his van was banged from behind.

As you is common place when such things happen, Roger leaped out to see the damage, and before he knew it he was pushed to the floor, a second thief jumped into the van. Roger, bruised, sore and a little taken back by it all watched his van disappear down the road.

Still, despite his shock, Roger was quick witted enough to call his company - Delta Security - urging them to check the company’s vehicle tracking system.

Dave Mundy, the London firm’s operations manager, said: “I ran to my laptop, logged on to our Quartix tracking system and entered the registration number of Roger’s van. A few seconds later I could see a map with the van clearly marked and showing it was travelling along the North Circular from Walthamstow towards Edmonton.

“I dialled 999 on the landline and asked for the police.”

Dave explained the situation to them and said he was tracking the Ford Transit online and could explain exactly where it was.

Dave was asked to continue his live transmission of data to the police, telling them that the van had left the North Circular and entered High Road, Tottenham and the precise time it turned into a yard.

“The Quartix system showed the van to be stationery with the ignition off. The time was 9.59pm. At 10.01 the first police car arrived on the scene with a second car arriving a minute later,” Dave said later.

The van was found locked, unoccupied and undamaged, although the hijackers – including, possibly, a third man who had earlier driven the thieves’ get-away car – appeared to have fled after hearing the police cars’ sirens.

Now, following forensic analysis, the van is back with Delta Security: and the only thing missing – Roger Hirsch’s personal phone.

Dave added: “If it hadn’t been for our tracking system and the quick actions of the police I’ve no doubt the story would have ended quite differently, with a stripped-out van being torched in an alley. As it is, after replacing the van’s locks Roger is providing a normal service. Quartix is a great system and assists with efficiency, fuel consumption, congestion charges and vehicle recovery.”

Delta Security, which is celebrating 50 years in business this year, has equipped its entire small fleet of 14 business vans, including Ford Transits, VW Transporters and Toyota Hiaces, with the Quartix vehicle tracking.