“Titans of the Sea: Posters from the Golden Age of Ocean Liners” at International Poster Gallery April 16 - June 15, 2012 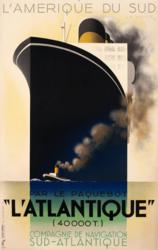 Works from major lines like Cunard, White Star, French Line and many others.

International Poster Gallery (IPG) proudly presents “Titans of the Sea: Posters from the Golden Age of Ocean Liners”, a show and sale of the greatest vintage ocean liner posters, ranging from the birth of the “Floating Palace” in the 1890s to its decline in the Jet Age of the 1960s. The show, commemorating the 100th anniversary of the sinking of the Titanic, and the largest known of its kind ever offered by a gallery, explores the romance and adventure of ocean travel with 35 extraordinary selections from a recently acquired 200-poster collection. Included are works from major lines like Cunard, White Star, French Line, and many others.

An opening reception is scheduled for Thursday, April 19 from 6-8pm and is open to the public. International Poster Gallery is located at 205 Newbury Street in Boston and is open daily from 10am – 6pm and Sunday from noon – 6pm. For additional information, please visit http://www.InternationalPoster.com or call 617-375-0076.

The innovation of steam power in the 19th century opened the world to a Golden Age of ocean liner travel. Fueled initially by the need for reliable mail delivery and a transportation network for the British Empire, the industry saw an explosion of popularity during the “Great Atlantic Migration” that brought 29 million immigrants to the United States between 1871 and 1914. By the turn of the century, ocean liners began to compete for prestige and currency through luxurious first class quarters on the upper decks. Posters for Cunard’s Mauretania (launched 1906) and White Star’s Titanic (1912) advertised veritable Floating Palaces that rivaled the opulence of the era's grand hotels. Huge capital investments, national pride and defense concerns entangled governments and private companies in their battle for supremacy on the high seas.

This show includes towering masterpieces of this glamorous era. Featured are a rare horizontal format poster by Sebille of the SS. France (1912), and Rosenvinge’s majestic Cunard Line (1914), portraying the newly launched Aquitania heading out to sea under full steam. A cutaway view of the same ship reveals the inner workings of a Floating Palace that led to the advertising phrase “the only way to cross”.

The beginning of World War I brought an abrupt halt to the boom in ocean liner travel, with many civilian ships converted for military duty. The Lusitania, a passenger ship in the Cunard Line, was famously sunk by a German U-Boat in the early years of the war. The tragic event swayed public opinion against Germany, as can be seen in a rare Irish recruiting poster featured in the show. However, developments in more efficient propulsion technologies and the creation of the “Tourist Class” passenger cruise reinvigorating the industry after the war. Some posters of the era capitalized on these innovations, while others continued to use more traditional imagery, like the poster in this exhibition for America’s Leviathan, 1925.

Despite the worldwide Depression, some of history’s most spectacular ships were launched in the late Twenties and early Thirties. The arrival of the Normandie in 1935 signaled the apex of this Golden Age. It was the largest and fastest ocean liner, able to cross the Atlantic in little more than four days, and the ultimate expression of the artistic and scientific genius of France. Posters of this era are classics, and are well represented in this show. Most are executed in a streamlined, Art Deco style, led by 5 posters by A.M. Cassandre. Notable highlights include his most difficult to find and spectacular images l’Atlantique (1931) and Normandie (1935), which capture the scale and power of these Machine Age wonders.

The ongoing global depression and rising international tensions brought an end to this carefree and relaxed world, and when World War II broke out, orders were given to convert the Normandie, the Queen Mary and Queen Elizabeth into troop carriers. A fervent arms race inspired intense development of faster, more reliable aircraft, which ushered in a permanent decline in the popularity of travel on the high seas. The Golden Age of the Ocean Liner nevertheless continued into the Fifties and early Sixties, often on refurbished liners, but also on a few new super liners such as the SS United States (1952).

A book detailing the entire ocean liner collection is available through IPG. In addition to gallery shows and special exhibitions, IPG’s award-winning website, http://www.Internationalposter.com offers one of the largest, most comprehensive online collection of vintage advertising posters in the world. Originally launched in 1998, the site contains nearly 5000 images accessible through a powerful search engine.