Attorney Bruce Margolin announces his bid for US Congress in California’s newly formed 33rd district. With his innovative platform, he brings grassroots energy and a new approach to solving some of the district’s most pressing, heartfelt issues. 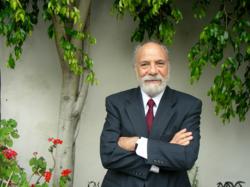 Bring Congress Home to Work, a high tech solution for the serious problems caused by the influence of DC Lobbyists.

With his name now added to the ballot for California’s open primary election on June 5th, Bruce Margolin, respected attorney and marijuana law activist enters into the US Congressional race for CA’s new 33rd district. At the center of Attorney Margolin’s platform, is a proposal to Bring Congress Home to Work, a high tech solution for the serious problems caused by the influence of D.C. Lobbyists upon Congress. Bring Congress Home to Work is a telecommuting solution for our times that he believes would produce the kind of shift needed to balance the influence of voters with that of big industries and special interests.

Bruce Margolin, a practicing attorney for forty years in the Los Angeles area, has served on the Site Council for Beverly Hills Unified School District. He was Chairman of the Ethics Committee for the National Association of Criminal Defense Lawyers, and has stood as director of the Los Angeles chapter of NORML (National Organization for the Reform of Marijuana Laws) since 1973. He has acted as an advisor or sponsor to numerous pieces of California state legislation including California’s prop 215, the nation’s first medical marijuana law. He has been awarded the Certificate of Appreciation from the ACLU (American Civil Liberties Union), as well as received honors for his work on behalf of the Constitutional Rights Foundation. Mr. Margolin has been awarded an Honorary Teaching Degree by the Los Angeles Unified School District and is an ad hoc teacher and law school lecturer.

Bruce Margolin knows firsthand about the concerns of L.A. County’s Westside and Valley residents, as he has resided, worked, and received his education while living his entire life in the district. He is the father of six children; all have or currently are attending public schools with kids in elementary, high school, and university, including U.C. Berkeley.
As a frequent user and passionate supporter of public schools, Mr. Margolin can be counted on to protect and rebuild our public education system, ending school closures, cuts to education, and skyrocketing tuition.

Mr. Margolin served in the U.S. Army and his father was WWII Marine drill sergeant. He is committed to both our active and veteran soldiers and to restoring the promise and rightful use of the West Los Angeles VA Campus, another top priority for the candidate, one he believes to be a birthright to every soldier who has served our country, and one he sees could create a large number of good professional jobs in his district as an added benefit. He promises to stand strong with those who are fighting to give the VA Land back to the veterans.

Bruce Margolin intends to put an End to the Failed War on Drugs using education and treatment over incarceration as a way of solving the plague of street drugs being pushed upon our cities. Mr. Margolin believes that the amount of resources which we could save by changing the way we wage war on drugs would be great and the social benefits almost too many to count. Mr. Margolin emphasizes that redirecting our tax dollars from jails to public schools and educational programs through more sensible policies is the only logical way forward.

With the advent of new technologies being introduced into all areas of government, Mr. Margolin knows that we must build safety checks and balances into the system to protect our civil liberties, and that a free internet is essential to the well being of our democracy.

With his innovative platform, Attorney Bruce Margolin brings grassroots energy and a new approach to solving some of the District’s most pressing and heartfelt issues, putting veterans and public education at the top of the list. Bruce Margolin promises to bring the spirit of the “Occupy” movement into our justice, financial, healthcare and regulatory systems.

Bruce Margolin is a participant in the movement to Replace Congress, a movement to elect real working people who are part of the 99%.