Human Rights Youth Coordinator for the Church of Scientology increases awareness of this growing global issue at recent talk. 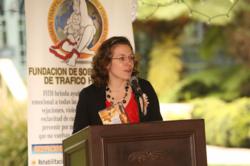 Most people think this is only a problem in third-world countries, but it is happening right here. Raising awareness is vital

The Church of Scientology Celebrity Centre International hosted a forum and fundraiser March 31 to increase awareness of human trafficking and its consequences in Southern California. Funds raised will go to support human rights education.

Virginia Isaias, whose Foundation of Survivors of Human Trafficking (Fundacion de Sobrevivientes de Trafico Humano) is a resource center to help those who have escaped or been rescued from slavery, urged survivors to speak up to raise awareness of the plight of trafficking victims.

Youth for Human Rights volunteer Cristal Logothetis, who organized the forum, explained why she became involved with this issue.

“A few months ago, I was shocked to learn the International Labor Organization estimates as many as 27 million individuals are enslaved today and according to the U.S. State Department Trafficking in Persons Report, every year 600,000 to 800,000 persons are trafficked across international borders.”

The U.S. State Department also estimates 14,500 to 17,500 individuals, primarily women and children, are trafficked to the United States annually. Last week, The New York Times reported an estimated 100,000 to 300,000 American-born children are sold for sex each year. In its October 2007 Final Report, the California Alliance to Combat Trafficking and Slavery Task Force noted that California is a top destination for human traffickers.

At the March 31 forum, Tracie Parker, Human Rights Youth Coordinator of the Church of Scientology International, highlighted the importance of human rights education in fighting human trafficking: “Most people think this is only a problem in third-world countries, but it is happening right here. Raising awareness is vital. Tips to authorities from private citizens are a prime means of locating and freeing victims and apprehending traffickers.”

The Church of Scientology sponsors one of the world’s largest nongovernmental human rights information campaigns, aimed at raising awareness and calling for governments to meaningfully support and ensure respect for human rights.

The Scientology religion was founded by author and philosopher L. Ron Hubbard. The first Church of Scientology was formed in the United States in 1954 and has grown to more than 10,000 Churches, Missions and affiliated groups and millions of members in 167 nations.