Contest to highlight colors of the urban forest. 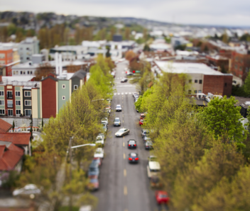 We hope this photo contest will encourage people to go outside this season, and maybe they’ll learn a little more about their own neighborhood forests in the process.

The Grand Prize winner will receive $200 in outdoor gear courtesy of the National Forest Foundation.

The contest, which runs from April 11 – July 22, seeks to highlight the natural beauty that spring and summer bring to U.S. neighborhoods, communities and cities, as well as the crucial role of trees in the places we call home.

Those interested in competing should visit Challenge.gov for more details on the prizes and contest rules.

“Urban forests are different from the forests you might normally think of, but they are functioning, hard-working ecosystems just the same,” said Tidwell. “As our neighborhoods warm up, trees add a crucial element of beauty to the places where we live, learn and work. We hope this photo contest will encourage people to go outside this season, and maybe they’ll learn a little more about their own neighborhood forests in the process.”

With 80 percent of the nation's population in urban areas, there are strong environmental, social, and economic cases to be made for the conservation of green spaces to guide growth and revitalize city centers and older suburbs.

Urban forests, through planned connections of green spaces, form the green infrastructure system on which communities depend. This natural life support system sustains clean air and water, biodiversity, habitat, nesting and travel corridors for wildlife, and connects people to nature.

The mission of the U.S. Forest Service is to sustain the health, diversity, and productivity of the nation's forests and grasslands to meet the needs of present and future generations. Recreational activities on our lands contribute $14.5 billion annually to the U.S. economy. The agency manages 193 million acres of public land, provides assistance to state and private landowners, and maintains the largest forestry research organization in the world.