Internationally recognized tennis star Anna Kournikova will once again team up with the USO and travel to Spain to commemorate 'Month of the Military Child' as part of her fourth USO experience April 14-18. 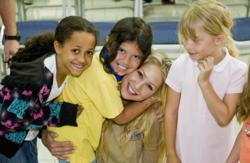 “It is hard to believe that this trip will mark my fourth time working with the USO," said Kournikova. "It is truly an honor to for me to help kick off their campaign and to travel to Spain to visit spend time with airmen, soldiers and their families.

WHY:    Internationally recognized tennis star Anna Kournikova will travel to Spain and commemorate Month of the Military Child as part of her fourth USO/Armed Forces Entertainment tour April 14-18. Traveling to the region to extend her heartfelt gratitude to military families, Kournikova will talk with and motivate military kids about the importance of maintaining a healthy lifestyle and following their dreams.

Known as one of the world’s leading female professional athletes, Kournikova is looked up to as a role-model for her success in tennis, an advocate for children and as a global voice for health and fitness. A strong supporter of troops and their families, she first teamed up with the USO in 2008 and traveled to Guam. Touched by the experience, she went on to Turkey and Germany in 2009 and spent a week visiting with military school children and wounded warriors. In December 2009, she participated in a three-country, seven-day USO holiday tour, which included stops in Iraq, Afghanistan and Germany led by the Admiral Mike Mullen. To date, Kournikova has boosted the spirits of more than 10,900 service members and their families with help from the USO.

Born in Moscow, Kournikova picked up her first tennis racquet at the age of five. Just five years later, she signed a management deal and, in 1995, turned pro. The youngest player to ever participate and win a Fed Cup match, Kournikova went onto defeat many of the world’s top players, including Lindsay Davenport, Steffi Graff, Monica Seles and Martina Hingis. These wins, along with her consistent top 10 singles rankings, two Grand Slam Doubles titles, a #1 ranking in doubles and three Grand Slam Mixed Doubles titles, showcase her athleticism, talent and perseverance on the court.

Dedicated to supporting and enhancing the lives of America’s Armed Forces, the USO kicked off its 2012 Military Families Campaign on March 26. In order to heighten awareness of family themed USO programs, the campaign highlights such programs as USO tours, the United Through Reading® Military Program, USO Warrior and Family Care and Operation Phone Home®, among others.

QUOTE:     Attributed to Anna Kournikova:
“It is hard to believe that this trip will mark my fourth time working with the USO. They are such a wonderful organization and they do so many meaningful things for troops and their families. It is truly an honor to for me to help kick off their campaign and to travel to Spain to visit spend time with airmen, soldiers and their families.”

NOTE:    Support the USO’s Military Family Programs at uso.org/programs or give a gift to a         military family through USO Wishbook at usowishbook.org.