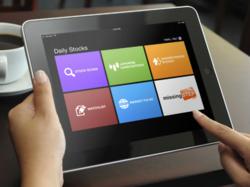 Real-time charts and a watchlist hosted in the cloud are two things that add true value to their experience and give them a higher level of security.

Developers of Daily Stocks, which launched with the original iPad in 2010, missingSTEP have released a new version of their popular app. The updated app features real-time charts, a cloud-hosted watchlist for each users stocks, new technical indicators, an updated market and news page, and intraday charts.

The app, a market leader and a favorite among day traders and stock market investors of all kinds, scans the market for overextended stocks, japanese candlestick patterns, and other various scans such as crossovers and volume events.

Opting to add the new features to the already feature-rich app, missingSTEP gives current users these new features free of charge. "We want to give our users the best experience possible" stated Alp Simsir, founder of missingSTEP. "They have been very loyal to us and deserve nothing but the best that we can deliver with the technology at hand. Real-time charts and a watchlist hosted in the cloud are two things that add true value to their experience and give them a higher level of security. Their research won't be lost and the prices that they're seeing within the app are not delayed."

Daily Stocks is the first of many planned updates and new releases that missingSTEP have planned for this quarter.

missingSTEP is an industry leader in finance app development and the developers of other highly rated and successful iPad apps such as Market Scan, Stock Arbitrage Trader, Stock Trading Ideas, and Stock Signals.