Antoine de Courten has come up with the fascinating details of place, time and people that will eventually become the Canadian nation. 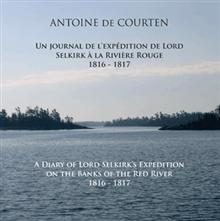 Canada 1816. The British Empire has vanquished Napoleon, but at what cost! England, completely drained, seeks other avenues of sustenance for its impoverished people. This is the context that forms the basis for “A Diary of Lord Selkirk’s Expedition on the Banks of the Red River 1816-1817” (published by Trafford Publishing) by Antoine de Courten.

Thus the year 1816 finds Lord Selkirk with Lieutenant Frederic de Graffenried and other officers in Canada. Selkirk forms an expedition with settlers and former soldiers from the Swiss mercenary regiments of Meuron and de Watteville to reinforce his colony by the Red River, site of present-day Winnipeg, Manitoba. Antoine de Courten has written the dramatization of a widely unknown chapter of Canadian history. With Selkirk managing the planning of the expedition and de Graffenried’s expertise in leading parties through wilderness and his knowledge of Indian tribes, it is hoped that they could raise the colony’s safety and economic status.

The story is in the form of Lieutenant de Graffenried’s diary – an epic trek through the Canadian wilderness. The journey takes the reader along on three of the five Great Lakes, through the dangerous rapids and hard tedium of portages, through violent storms and the territories of the Indians – some proud, others wretched (many of them already suffering a dramatic decline due to the run distributed by the Whites). During one dangerous journey in the deepest winter, expedition members survived solely on moss, boiled leather strips and fir needle tea.

Filled with great descriptions of Indian customs and costumes, the book is an insightful look at the making of a hybrid Western culture influenced by natives and geography. This original and thrilling account keeps the reader spellbound until the end.