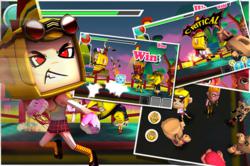 Lucky Fighter is a quick-to-learn, addictive, action packed casual game for iOS. The main character’s task is to face off against 100 lowlife bullies in a dramatic rock-scissors-paper duel that continually devolves to punches in the face. As an underdog against seemingly unbeatable odds, players will take on their customized character’s foes using skill and strategy. In-game special items provide a number of perks to set the player up for success, when used wisely.

Lucky Fighter is socially interactive in addition to being an upbeat action experience. Players can tweet and share their scores, and take advantage of Game Center integration to boast of their bully-beating skills. In addition, they can customize the main character with their own face in order to create a personalized hero, and take photos against different backgrounds featuring themselves as the star of the game.

Lucky Fighter is available now in the iTunes App Store for free which is nothing to pay to make 100 bullies face the music!