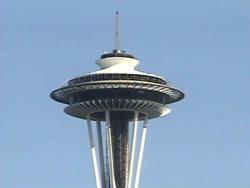 Seattle's ultimate “must see” and most recognizable icon will be celebrating its 50th anniversary this month and EarthCam invites people around the world to join in and pay tribute with views from their exclusive webcam.

EarthCam's streaming webcam showcases fantastic views of the Space Needle, as well as Elliott Bay and downtown Seattle. EarthCam's webcam has been stationed at the Marqueen Hotel for the past 12 years, delivering spectacular views of the symbol of Seattle to viewers around the world.

Head to the observation deck of the Space Needle for unmatched views from an additional two webcams. These cameras, prominently featured on the official website of the Space Needle, offer breathtaking 360 degree views of the city skyline. EarthCam's innovative software automatically stitches together the images captured from both webcams, creating this completely unique viewing experience. Click around on the interactive camera images to learn more about the frequently visited tourist hot spots and landmarks in the city, including Safeco Field, Mt. Rainier, Puget Sound, Seattle Waterfront and so much more!

The Space Needle's first 50 years were filled with incredible and memorable events, including the construction groundbreaking in 1961, the very first New Year's Eve fireworks celebration in 1992 and the grand reopening after a major revitalization in 2000. The 50th anniversary party will most definitely be joining this impressive historic time line.

After the anniversary celebrations have ended, EarthCam's webcam will continue to feature great views of this location 24/7. Visitors can enjoy views of this great city whenever they like!

The award winning company hosts the world's most popular social media webcam network with over 50,000 Facebook fans. Some highly trafficked tourism cams are these popular locations: Times Square, the Abbey Road Crossing in London and the Las Vegas sign.

EarthCam has been delivering live streaming views of the Space Needle for the past 12 years.

This symbol of Seattle can be enjoyed by people around the world via EarthCam's live streaming camera.