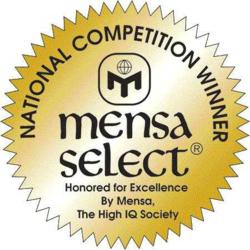 You don’t have to be a genius to enjoy this year’s Mensa Select winners, but be prepared to have your mind teased while being entertained in the process!

300 judges, 68 competitor games, and forty-eight hours of nonstop board game action later, five winners emerge victorious. Mensa of Metropolitan Washington hosted this sold out event in Herndon, VA. Members of American Mensa, the high IQ society, selected five Mensa Select winners at its 2012 Mind Games event. Out of the 68 entries in this year’s competition, only these five will have the honor of displaying the coveted Mensa Select seal. This year’s Mensa Select games are:

IOTA: a compact card game in which players compete to score points by adding cards whose 3 attributes individually are either all the same or all different. (Gene Mackles)

Snake Oil: How would you sell a Burp Balloon to a Ninja, or a Lava Cannon to a Rock Star? With Snake Oil, players invent crazy two-word products and quickly sell them to all types of wacky customers. (Snake Oil, LLC.)

Mine Shift: Move a jewel, rotate a tile or shift the board. Each turn gives you 3 moves to navigate your jewels around the mine walls and through the maze. (MindWare)

Coerceo: an abstract strategic game where the objective is to enclose and remove the opponents pieces. It has a dynamic board that shrinks during play. (Coerceo Company)

American Mensa is a community for people who score in the top two percent on an accepted, standardized, intelligence test. The organization has more than 56,000 members in the United States and more than 110,000 members around the world. For more information about Mensa, or to apply for membership, visit http://www.us.mensa.org or call (800) 66-MENSA.