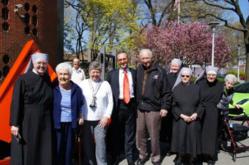 Bryan Salamone and the Little Sisters of the Poor

Words cannot describe how I felt as I was comforted and relieved by the compassion of the Little Sisters of the Poor.

On April 13 2012, the auto racing team sponsored by Bryan L. Salamone, Esq. brought their racecars to the residence to make the donation and delight the residents. That day, a unique alliance was formed between the aggressive attorney and the nuns, who gave Mr. Salamone and his racecars a special blessing prior to a dangerous and grueling 3,600 cross-country race known as the Gumball3000 Rally. Mr. Salamone has promised to continue to donate and maintain the Little Sisters of the Poor and Queen of Peace Residence as his personal charity, which he has supported for several years.

Mr. Salamone reported that he could not believe how the Sisters and elderly residents were eager to sit in the racecars, to participate, and ask questions about the event. “Both our Lamborghinis received a blessing. They were sprinkled with holy water and St. Joseph was placed in the cars,” according to Mr. Salamone.

The Little Sisters of the Poor are an international Roman Catholic congregation of religious women dedicated to the care of the aged poor. They own and operate the Queen of Peace Residence, which is a residential health care facility that serves the elderly poor regardless of race, religion or ethnicity. The residence offers patients a high level of care, compassion and mercy. A homelike environment and non-profit facility, it must raise 60 percent of its budget to meet operating costs.

The Gumball3000 Rally, the race in which Mr. Salamone’s team is about to participate, has been featured on the cover of Esquire, Vanity Fair, and GQ, and has been attended by everyone from rock stars to royalty. However, the rally has not been incident-free. Mr. Salamone was eager to have his cars blessed, and to have received a blessing himself, prior to the Rally. “Auto racing is a dangerous sport and I have no fear. I will be the first person to drive from New York to California in the most aggressive Italian sports car ever made. I am glad to have the cars blessed and to be able to help my favorite charity,” said Mr. Salamone.

Family law attorney Bryan L. Salamone has the reputation of being aggressive and commanding, especially in the courtroom. To compliment his professional aggression, Mr. Salamone sponsors a racing team that competes on tracks and in long distance rallies. The racing team has been featured on MTV and in numerous publications, dozens of auto magazines, and blog spots. Mr. Salamone will be the first person to drive a 700 horsepower Lamborghini Aventador from New York to California in the Gumball3000 Rally. He will make the trip as the sole driver of the vehicle alongside professional drivers, sports personalities, and celebrities.

The law firm of Bryan L. Salamone & Associates, P.C. was founded by Bryan L. Salamone and is entirely dedicated to family law. The firm handles most family law concerns, including custody, orders of protection, and neglect cases, together with divorce and child support matters. The Long Island family law firm offers free consultations on selected cases and Mr. Salamone’s victories have been reported in many network newscasts, newspapers, and periodicals. The firm’s lawyers focus on aggressive litigation and are in court almost every day. Mr. Salamone attends most all of the personal consultations for new clients and handles trials in Nassau and Suffolk Counties, New York City, and the surrounding boroughs. For a free consultation, or to learn more about Bryan L. Salamone & Associates, P.C., visit the website at http://www.divorcelawyerlongisland.com.