Country music singer/songwriter Toby Keith commemorates a decade of visiting, entertaining and uplifting troops and their families with a 12-day USO tour abroad. 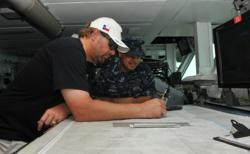 I can’t believe it has already been a decade, it feels like just yesterday when I first started working with the USO," said Keith. "I’ve met so many great, brave service men and women over the years and had so many wonderful experiences...

Award-winning singer/songwriter Toby Keith celebrates a decade of touring the globe, performing shows and visiting troops with the USO during five-country, 12-day USO/Armed Forces Entertainment tour. Traveling to the Middle East to lift the spirits of troops and their families, the megastar will continue his longstanding tradition of visiting remote forward operating bases and delivering a much-needed touch of home.

Attributed to Toby Keith:
“I can’t believe it has already been a decade, it feels like just yesterday when I first started working with the USO. I’ve met so many great, brave service men and women over the years and had so many wonderful experiences, that I can barely remember them all. One thing is for sure, I enjoy working with the USO, I love our nation’s troops, and I won’t ever stop doing my part to extend my thanks.”

Attributed to USO President Sloan Gibson:
"The USO considers it a real privilege to have worked with Toby Keith over the last ten years. He has such a genuine interest in enhancing the lives of our nation’s troops and is truly among our biggest and most recognized supporters. We can’t thank him enough for all of the support he has shown us over the last decade and we look forward to many more years together.”

Five-Country, 12-Day Troop Visit Marks Tenth USO Tour for the Singer/Songwriter, Who Has Lifted the Spirits of More Than 182,600 Service Members