The Rottenstein Law Group, which represents clients with claims stemming from the failures of defective hip replacement devices manufactured and sold by DePuy Orthopaedics, looks forward to the start of the earliest trials concerning the embattled ASR hip implants. 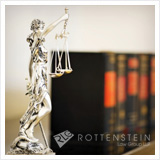 The Nevada and Maryland plaintiffs fought against DePuy to keep their cases out of federal court and the ASR multidistrict litigation (MDL) proceeding because they believed that process would take too long. MDL consolidates the pretrial proceedings of a large group of cases with common facts, legal issues, and parties. The DePuy ASR MDL is being administered in the United States District Court for the Northern District of Ohio before Judge David A. Katz. Judge Katz recently requested that the parties discuss bellwether trial selection protocols and submit proposals to the court on April 27, 2012. An open court conference will be held on May 1. It is unknown when the first bellwether trial will begin.

Rochelle Rottenstein, principal of the Rottenstein Law Group, implores anyone with a friend or relative who has received a dangerous hip implant or other medical device to reach out to that person and recommend that he or she consult a physician immediately and then speak to a qualified personal injury lawyer.