Kaminski Auctions Announces One Day May Asian Sale May 12th starting at 10:00 AM

Following their record breaking March Fine Asian Art and Antiques auction, when four paintings by the Chinese artist, Qi Bashi brought a record $2.8 million dollars, Kaminski Auctions announces its May Asian Art and Antiques sale to be held May 12th, 2012 at its auction gallery at 117 Elliot Street, Rte. 62, Beverly, Massachusetts. 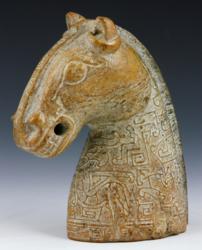 The top lot of the sale is a Chinese, Ming Dynasty (1368-1644) horse head calligraphy chop stamp, the chop is semi translucent amber green nephrite jade with inscriptions carved on the head estimated at $15,000-$25,000. Other jade in the sale includes a Chinese, Qing Dynasty (1644-1911), blooming flower vase of semi translucent amber green nephrite jade, carved in the form of an opening flower valued at $3,000-$5,000 and a Chinese Jade Scepter, carved with a bat, a dragon and inscription also valued at $3,000-$5,000.

An interesting pair of ivory figures, carved in the form of an emperor and empress and having intricately carved robes, on rosewood stands, standing 19"high are valued at $6,000-$9,000

A Qianlong Dynasty, Chinese brush pot made of stone carved with bamboo, plum blossoms and clouds is estimated at $4,000-$6,000.