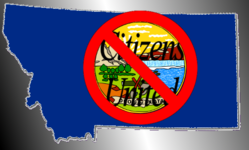 Citizens United may be effectively reversed, right now, within two months, for this 2012 election...but quick public action is needed to help make this happen.

The Eleventh Amendment Movement (TEAM, http://www.11thAmendment.org), a non-partisan political action association based in Hawaii, will argue the “technical error” among other 11th Amendment constitutional issues in a court filing in the current case of American Traditions Partnership vs. Bullock (Montana). That case involves a recent Montana Supreme Court decision that upheld the state’s own anti-corruption election finance laws in defiance of the federally mandated Citizens United ruling that allows for unlimited corporate spending in state elections. Montana’s decision has now been petitioned for appeal to the U.S. Supreme Court. The high court has not yet decided whether it will hear the appeal.

“Montana said ‘NO WAY!’ to Citizens United and the 11th Amendment to the Constitution says the Supreme Court has no constitutional authority to hear any appeal,” said Adam Furgatch, a spokesman for TEAM, in an interview. “The 11th Amendment says that the Court may only hear cases involving a state government under very specific circumstances, and those circumstances are clearly not present in the Montana case. The Court should refuse to accept the Montana case, and then Montana’s anti-corruption election laws will stand and Citizens United will be effectively negated, right here, right now.”

Carl Mayer, a prominent New York civil liberties attorney acting as lead counsel for TEAM added, “Contrary to recent news reports, the Court has not yet agreed to take this Montana appeal. They must recognize the 11th Amendment restrictions placed upon them and deny the petition and refuse jurisdiction.”

Mayer explained that, “TEAM’s position includes comprehensive 11th Amendment arguments to deny the Court jurisdiction, but there’s also a technical error which, by itself, could get the case thrown out.” The technical error in the appeal petition is how Montana is named as a defendant. The state’s Attorney General (Steve Bullock) or other officers may not be named as defendants in their official capacity, yet the Citizens United petitioners did just that and made an “important blunder”, according to Mayer.

Mayer also confirmed that a refusal by the Supreme Court to hear the Montana case would allow the state to continue enforcing its strict anti-corruption election laws and to ignore Citizens United’s provisions for virtually unlimited corporate election spending. “The Court’s refusal would also serve as precedent for other states to enforce their existing anti-corruption election laws or to enact similar laws, with some confidence that the Supreme Court will not overturn them,” Mayer said.

“Citizens United may be effectively reversed, right now, within two months, for this 2012 election,” Mr. Furgatch emphasized. “But quick public action is needed to help make this happen, as there are imminent May 8th and May 18th Court filing deadlines. Despite the time-crunch, TEAM has an action plan to get this done.”

TEAM’s website urgently calls on the Attorneys General of all other states to support Montana with an 11th Amendment “friend-of-the-court” legal brief that all states may file with the Court. TEAM’s primary message says that “all states have a unique opportunity to stand in solidarity and resist an unconstitutional power-grab by the Federal Judiciary, and to reject Citizens United according to the will of the majority of their citizens.” The public is also strongly encouraged to get involved, and TEAM’s action plan provides simple steps an individual can take in support.

Mr. Furgatch stressed that support for TEAM’s message is coming from across the political spectrum. “This is a non-partisan effort that may be endorsed by all those opposed to the Citizens United ruling,” he said. “Political leaders as diverse as President Obama and Senator John McCain agree that the Supreme Court made a huge error, and polls show that an overwhelming majority of voters think it was a bad decision.”

He summed up TEAM’s efforts, “Enforcing the 11th Amendment to deny the Supreme Court jurisdiction in the Montana case will allow Montana’s election laws to stand. It will be a huge blow to those who would profit from unlimited election spending, and be a huge step towards getting corrupting money out of politics.”