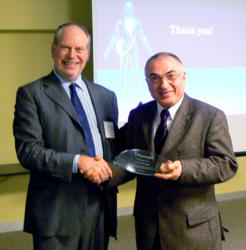 SynCardia Chairman/CEO/President Michael Garippa congratulates Dr. Latif Arusoglu, who was honored with a Proctoring Impact Award from SynCardia at ISHLT for his tireless efforts in proctoring first implants of the Total Artificial Heart at hospitals around the world.

SynCardia Systems, Inc., manufacturer of the world’s first and only FDA, Health Canada and CE (Europe) approved Total Artificial Heart, honored eight SynCardia Certified Centers and surgeons for their use of the SynCardia temporary Total Artificial Heart and the Freedom® portable driver during the annual meeting of the International Society for Heart & Lung Transplantation (ISHLT) held April 18-21 in Prague, Czech Republic.

Achievement: These surgeons exhibited leadership in use of the SynCardia Total Artificial Heart for pediatric patients suffering from congenital heart failure.

Texas Children’s became the first pediatric hospital in the world to implant the Total Artificial Heart in May 2011. The patient, 17-year-old Jordan Merecka, had been born with a "reversed" heart (dextrocardia) and his heart vessels backwards (corrected transposition of the great arteries). He went on to become the first pediatric Total Artificial Heart patient to be discharged from the hospital using the Freedom portable driver and received his heart transplant on Oct. 20, 2011.

CHOP became the first hospital to implant the Total Artificial Heart into a pediatric patient suffering from a failed Fontan procedure in January 2012. The teenager was bridged to transplant in March 2012.

Achievement: UK Medical Center completed SynCardia’s four-phase Certification Program in record time to save the life of 20-year-old Zack Poe, who was discharged home using the Freedom portable driver just 25 days after the hospital completed its first phase of certification.

During ISHLT, several of the surgeons above also participated in SynCardia’s Clinical Investigator's Meeting for the Freedom® portable driver, the world's first wearable power supply for the Total Artificial Heart. The Freedom driver is CE approved for use in Europe and undergoing an FDA-approved Investigational Device Exemption (IDE) clinical study in the U.S.

Similar to a heart transplant, SynCardia's Total Artificial Heart replaces both failing heart ventricles and the four heart valves, eliminating the symptoms and source of end-stage biventricular failure. Unlike a donor heart, the Total Artificial Heart is immediately available at SynCardia Certified Centers and does not require expensive anti-rejection medication, which can cause subsequent complications. It is the only device that provides immediate, safe blood flow of up to 9.5 liters per minute through both ventricles. This high volume of safe blood flow helps speed the recovery of vital organs, helping make the patient a better transplant candidate.

SynCardia Ranked #20 Among World's 50 Most Innovative Companies
In March 2011, Fast Company magazine ranked SynCardia #20 in its annual list of the "World's 50 Most Innovative Companies" for "giving mobility to artificial heart recipients." Weighing 13.5 pounds, SynCardia's Freedom® portable driver is the world's first wearable driver designed to power the Total Artificial Heart both inside and outside the hospital. The Freedom driver is CE approved for use in Europe and undergoing an FDA-approved Investigational Device Exemption (IDE) clinical study in the U.S.