Author Alvin JacQues, a Katrina survivor, writes new book Catastrophic Gumbo and gives readers an inside view of one of the nation’s deadliest natural disasters 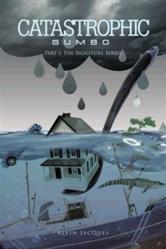 Hurricane Katrina. It is history’s burden to determine just how this tremendous disaster has affected the American psyche. But for Alvin JacQues the meaning of this devastating storm is clear. A survivor of Hurricane Katrina, JacQues considers himself lucky to be alive, and he credits his strong faith in God for both his survival and the opportunity to tell his story. It is through this spirit of gratitude that JacQues wrote his memoir, Catastrophic Gumbo: Part I: The Signature Series (published by Trafford Publishing).

In this memoir, JacQues examines the enormous devastation and causalities and tells a heroic tale of survival. Catastrophic Gumbo includes more than 30 stories that describe what really happened during this natural disaster – including his rescue by the Coast Guard, his experience of six days of chaos at the Superdome, the drowning of his mother, the ever-present death and destruction that he witnessed and the corruption of the New Orleans Police Department.

JacQues delivers a firsthand look at the facts, drama, details and aftermath of the costliest natural disaster in U.S. history.

News reports have given the world the stark numbers – over 1,800 dead; more than $81 billion dollars in damages – now, with JacQues’ memoir, readers get the inside story.

Catastrophic Gumbo gives a behind-the-scenes and personal look at the before, during, and after of this tragedy, while inspiring readers to live their best lives each and every day.

About the Author
Alvin JacQues is a survivor of Hurricane Katrina who worked as a minister before the hurricane. A performer for the last 30 years, he has gained stage recognition in the United States and abroad. He lives in Pennsylvania and has four grown children. JacQues is the author of Catastrophic Gumbo: Part I: The Signature Series and its sequel, Catastrophic Gumbo: Part II: The International Series.