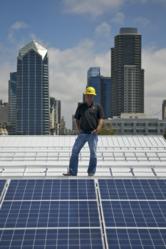 The entire process is somewhat daunting in that all of the semifinalists are incredibly intelligent and successful people.

Sullivan Solar Power today announced that Daniel Sullivan is a semi-finalist for the Ernst & Young Entrepreneur Of The Year® 2012 Award in San Diego. The award recognizes outstanding entrepreneurs who demonstrate excellence and extraordinary success in such areas as innovation, financial performance and personal commitment to their businesses and communities. Daniel completed the interview process with judges on Tuesday evening.

“The Ernst & Young Entrepreneur of the Year is the world’s most prestigious business award for Entrepreneurs, making this nomination my greatest honor to date,” said Sullivan.

Daniel Sullivan, a master electrician by trade, has a story is a classic American tale of entrepreneurial spirit. Sullivan, inspired by the birth of his son and the potential solar power presented to his hometown of San Diego, set out to create a company that would make the world a better place by reducing the region’s consumption of imported fossil fuels. With only $2,500 to start the endeavor, Daniel Sullivan was working and living out of the garage of a customer’s home that he was rehabilitating in 2004. As a one-man shop, he acted as the executive, the field installation team, the accountant, and the salesman. From these modest beginnings, his company has grown to more than 60 employees, annual revenues greater than $17 million, and has been ranked as one of the fastest growing firms in the nation by Inc. Magazine for two consecutive years.

Ask any local in the clean-tech industry and they will tell you that Daniel Sullivan is the
go-to expert for all things solar - whether it be policy, technology, financials or aesthetics. He has been a progressive leader in sustainability for the region, on the Board of Directors for both CleanTECH San Diego and California Solar Energy Industries Association (CALSEIA) San Diego chapter.

While Sullivan modestly credits all of his company’s success to his employees, his employees attribute Sullivan Solar Power’s level of attainment to his visionary leadership and principles. "Dan is the most passionate, intelligent, dedicated and hard-working person I have ever met," said Tara Kelly, a community developer at the firm, “He truly deserves this prestigious award.”

Now in its 26th year, the Ernst & Young Entrepreneur Of The Year Program has honored the inspirational leadership of such entrepreneurs as Jeff Bezos of Amazon.com, Michael Dell of Dell Inc., Herb Kelleher of Southwest Airlines, Fred Smith of FedEx, Larry Page and Sergey Brin of Google, Richard Schulze of Best Buy, Andrew Mason of Groupon, Mindy Grossman of HSN, Inc., Reid Hoffman and Jeff Weiner of LinkedIn, and many more.

“The entire process is somewhat daunting in that all of the semifinalists are incredibly intelligent and successful people,” said Sullivan, “It has been a humbling experience to be put in the same category as these esteemed business leaders.”

Finalists will be named in the coming weeks, with awards being presented at a special gala on June 13, 2012 at the Hyatt Regency Aventine in La Jolla, CA.

About Sullivan Solar Power
Sullivan Solar Power is a turnkey solar system provider that delivers solar electric projects from concept to completion. The company has installed over 9,000,000 watts of solar power ranging from small-scale residential to large-scale commercial and municipal systems. Sullivan Solar Power is headquartered in San Diego, CA and owned and operated by Dan Sullivan. Sullivan Solar Power has a longstanding A-plus rating with the Better Business Bureau, with no complaints filed since the business began. The firm has been named one of the fastest growing energy companies in the nation by Inc. Magazine and services all of Southern California. Regardless of project size and scope, Sullivan is committed to delivering the best products and the most qualified professionals to its customers. Visit http://www.sullivansolarpower.com for more information.

About Ernst & Young Entrepreneur Of The Year®
Ernst & Young Entrepreneur of the Year is the world’s most prestigious business award for entrepreneurs. The unique award makes a difference through the way it encourages entrepreneurial activity among those with potential, and recognizes the contribution of people who inspire others with their vision, leadership and achievement. As the first and only truly global award of its kind, Entrepreneur of the Year celebrates those who are building and leading successful, growing and dynamic businesses, recognizing them through regional, national and global awards programs in more than 140 cities in more than 50 countries.