Can Democracy Be Re-imagined Through The Occupy Movement?

Read this ground-breaking scholarly work, in the field of anthropology, on the Occupy Movement in the May issue of American Ethnologist. 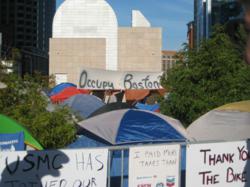 The May issue of American Ethnologist features the first published scholarly works on the Occupy movements in the field of anthropology. These articles include:

The Occupy Movement in Žižek’s hometown: Direct democracy and a politics of becoming by Maple Razsa and Andrej Kurnik. Razsa, Assistant Professor of Global Studies at Colby College was doing research in Ljubljana during when the Occupy movement reached Europe. In collaboration with Andrej Kurnik, a professor of political theory at the University of Ljubljana provide an ethnographic analysis of the Occupy Movement in Slovenia.

Journal editor, Angelique Haugerud of Rutgers University, notes "Authors of both articles also point out continuities and discontinuities between today's Occupy movements and the alter-globalization movements of the 1990s and early 2000s. Here Juris contrasts the effects of websites and listservs in earlier global social justice activisms with the influence of social media such as Facebook and Twitter in today's Occupy movements."

The final article is a commentary of the Juris and Raza and Kurnik articles, entitled, "Commentary: Democracy, temporalities of capitalism, and dilemmas of inclusion in Occupy movements" is by David Nugent. Nugent is a Professor of Anthropology at Emory University.

While the journal is typically accessed by subscription, these articles will remain free to access until the end of 2012.

American Ethnologist is a quarterly journal produced by the American Ethnological Society (AES). This journal is edited by Angelique Haugerud of Rutgers University and its subject matter deals with all facets of ethnology in the broadest sense of the term. Articles creatively demonstrate the connections between ethnographic specificity and theoretical originality, as well as the ongoing relevance of the ethnographic imagination to the contemporary world.

AES, founded in 1842, sponsors American Ethnologist and AES is a section of the American Anthropological Association.

Founded in 1902, the American Anthropological Association is the world’s largest professional organization of anthropologists and others interested in anthropology, with an average annual membership of more than 11,000. The Arlington, VA – based association represents all specialties within anthropology – cultural anthropology, biological (or physical) anthropology, archaeology, linguistics and applied anthropology.