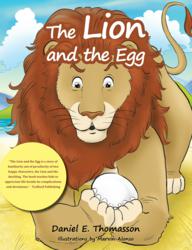 The commonly fabled story of an orphaned animal in search of his mother is a well-recognized one. Yet, like P.D. Eastman’s classic Are You My Mother? (a book which marks the genesis of the fable’s popularity), Daniel E. Thomasson’s new book “The Lion and the Egg” (published by Trafford Publishing) presents thinly veiled morality riffs that will delight readers as they revisit the book throughout their lives.

“‘The Lion and the Egg’ is a story about the relationships between a lion and a duckling that hatches from an egg then imprints onto the lion. The lion becomes the parent of the duckling and learns through trial and error how to help the duckling become an adult. Both sad times and happy times occur throughout the story, revealing a true sense of security, insecurity, and friendships between the two animals.”

While Thomasson’s tale pays homage to such writers as Eastman, it was inspired by a modern experience. “At Longleat Safari and Adventure Park in Wiltshire, England, lions are given ostrich eggs to eat for nutrition,” remembers Thomasson. “They would play with the eggs, get tired and fall asleep with the eggs between their paws. Their actions inspired me to write ‘The Lion and the Egg.’”

Featuring vivid illustrations, “The Lion and the Egg” will inspire as well as entertain young readers.

Says Thomasson: “The book is relevant in today's society because it deals with adversity and diversity within a mixed cultural family setting. The lion represents strength, security, and a single parent, while the duckling represents diversity, insecurity, and children that are different, or adopted within a family of a foreign culture.”

About the Author
Over the past 40 years, Daniel E. Thomasson has taught children Bible stories, music, chess and guitar. He lived in Germany, Japan, England, and around the U.S. from California to Texas and from Maryland to North Carolina. In 1979, he received an Associate of Arts in music and history from the University of Maryland, College Park, Maryland. His Bachelor of Science in creative writing and communications came in 1986 from the University of the State of New York, Albany, New York. He later completed his Master of Divinity in 1989 from Southern Baptist Theological Seminary, Louisville, Kentucky, with majors in theology and pastoral management.