Two Sunwarrior Ambassadors, Dustin Poirier and Jeremy Stephens will compete against well-matched opponents on May 15 during the UFC on Fuel TV 3. 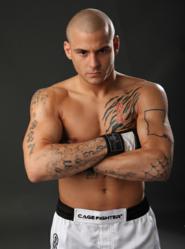 Their passion for fitness and excellence can’t be questioned.

Sunwarrior, a company located in Southern Nevada that creates raw, plant-based supplements on an international scale, announced today that two of their ambassadors, Dustin Poirier and Jeremy Stephens, will be competing in two exciting showdowns in the Ultimate Fighting Championship.

On May 15, the Ultimate Fighting Championship will present UFC on Fuel TV 3. The event will be held at the Patriot Center in Fairfax, Virginia, headlined by the featherweight match between Dustin Poirier “The Diamond” and Chan Sung Jung “The Korean Zombie.” The card will also feature another potentially great fight, Donald Cerrone “Cowboy” versus Jeremy Stephens “Lil’ Heathen.”

Sunwarrior seeks out leading professionals in the health, fitness, and nutrition fields, including athletes, to serve as ambassadors for Sunwarrior products and the Sunwarrior mission to illuminate body, mind, and planet. “These two mixed martial arts fighters are perfect ambassadors,” said Cody Roberts, Operating Manager of Sunwarrior. “Their passion for fitness and excellence can’t be questioned. We’re excited to have athletes like them using and promoting our raw, plant-based products as a healthier alternative for protein, vitamins, and minerals. We’re excited to see their success so far and we’ll be rooting for them today.”

Dustin Poirier is 12-1 in his career and has won five straight fights. He is 4-0 since entering the UFC. This puts him fairly evenly matched with Chan Sung Jung, making this bout very highly anticipated.

Jeremy Stephens has been in the UFC since 2007 and is one of the most reliable fighters in the promotion. He is 7-6 since joining the UFC and could be up against his greatest challenge to date with Donald Cerrone.

Sunwarrior was born on a warm Arizona evening in 2008 during the Sedona Raw Spirit Festival. Three different men with three different dreams met with one desire, to create a company and a product that benefit mankind and the planet mankind occupies.

The three men combined their dreams, their savvy business personalities, and their environmental consciousness to create Sunwarrior, a company committed to making the best plant-based products while elevating humanity and preserving the planet.

Sunwarrior creates healthy, raw, plant-based protein powder, supergreens and mineral supplements perfect for anyone and any lifestyle, not just vegetarians and vegans.