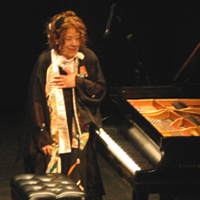 “There is no secret to her appeal: Fuzjko Hemming is not just playing the piano; she is seeming to enter a romantic reverie to find and unfold the music’s beauties and intentions.” (Gramophone Magazine)

Despite her severe hearing difficulties and turbulent life, including a time spent under refugee status, Fuzjko Hemming has beaten the odds to become a highly acclaimed concert pianist who shares her inspiring gift for music with the world.

Here is the only chance to hear the stirring sounds created by this legendary internationally acclaimed pianist, winner of platinum records and several prestigious music awards. The concerts will feature works by Chopin, Debussy, Liszt and Mussorgsky, including Fuzjko’s famous “La Campanella” by Liszt.

A portion of the proceeds from the “Arigato Charity Concert” will go to the 2011 Japan Relief Fund for the earthquake and tsunami victims in Japan.

For more information on the concerts, please visit http://www.soto-planning.com or Ingrid Fuzjko Hemming on Facebook at facebook.com/IngridFuzjkoHemming

For further information or to arrange an interview with Fuzjko, please contact Keiko Mori at (213) 446-9210 or keiko@musicstudio-f.org

“What touches people’s hearts during performances aren't good performances or bad ones; the music pouring from many life experiences moves people.”

“I believe that by taking a detour in my life after losing an opportunity, I have grown as a human. I have learned what’s important, as well—waiting patiently for your time in the world.”
--- Fuzjko Hemming

Having sold more than 2 million copies of her debut CD, “La Campanella,” an unprecedented accomplishment for any classical artist, Fuzjko Hemming is one of the most beloved pianists among Japanese and European audiences. Her debut CD came out when she was 69 years old. Now 80, she kicks off her U.S. tour in Los Angeles, San Francisco, Dallas and New York City in July.

Born in Berlin to a Japanese pianist mother and a Swedish architect father, Fuzjko relocated to Tokyo at the age of 5. Soon after the relocation, however, her father left the family for Sweden, which drove Fuzjko and her mother into poverty. Fuzjko started piano lessons with her mother, and by 16, she was hailed as a child prodigy. Then the first tragedy of her life struck: Ear inflammation led to deafness in her right ear. Despite this, she made her concert debut at 17 and performed with notable Japanese orchestras.

Fuzjko wished to continue her studies in Europe, but another obstacle awaited her. It turned out that she had become a nationless person; therefore, she could not obtain a passport for passage to Europe. She had lost her Swedish citizenship because she had never lived there, and her mother had never acquired Japanese citizenship for her. Eventually, with the aid of the German Embassy in Tokyo and the Japanese Red Cross, she was granted refugee status.

She was 29 when she finally arrived in Germany and started her studies at the Berlin Institute of Music. After completing her studies, Fuzjko moved to Vienna, where she met such renowned musicians as Leonard Bernstein and Bruno Maderna, who offered professional support for launching her career.

Then another crisis emerged: Extremely cold weather in Vienna and her inability to afford heating caused her to develop a high fever. She lost her hearing completely in her left ear—just before a recital that could have helped her achieve status as a leading performer. In the midst of her despair, Fuzjko moved to Stockholm to search for her father and receive medical care. Although her father refused to meet with her, her aunt helped her finally obtain a Swedish passport. Fuzjko was 40 years old when she eventually obtained citizenship, her first in any country.

In Sweden, she took odd jobs to make ends meet, including janitorial work at a psychiatric ward. Later, 40 percent of her hearing was restored in her left ear, and Fuzjko started performing again for small audiences in rural areas of Europe.

After having lived in Europe for more than 30 years, Fuzjko returned to Japan in her 60s and started playing the piano for patients in hospitals. In 1999, Japan’s public broadcaster NHK aired a documentary of her turbulent life story. The documentary received a sensational reaction, making her a classical music star in Japan overnight. In the same year, her debut album, “La Campanella,” was released and went on to sell over 2 million copies. Four of her 15 CD releases have received the Classical Album of the Year Award at the Japan Gold Disc Awards. She remains the only four-time Gold Disc Award winner—another extraordinary accomplishment for any artist, let alone a classical musician.

Audiences have rooted for her in Japan and Europe alike. She has been known to bring tears to the eyes of her fans with her touching immersion into her music. On her performances, Fuzjko comments, “I am not playing to bring sentimental tears to the eyes of audiences. My audiences respond to my music because all the sufferings and joys I have experienced in my life are coming out of my piano.”

Fuzjko has been actively performing numerous solo recitals and collaborating with international orchestras and musicians, such as the Moscow Philharmonic, Royal Philharmonic Orchestra, English Chamber, Hungarian Philharmonic and many more. As cellist Mischa Maisky refers to Fuzjko as “unforgettable pianist” and violinist Maxim Vengerov expresses “I’m an admirer of your art!”

Over the years she has been invited to perform at many European festivals, and in 2010, she played on the very last day of the Warsaw Chopin Festival held at a historical palace in front of the specially invited VIP audience. In 2012, her live performance for BBC Radio in London received rave reviews.

With her unorthodox performing style, sensitive sound, and intricate ethnic background, it is evident that Fuzjko’s true home is at the piano, where she has revealed herself to be an extraordinary artist of the global community.