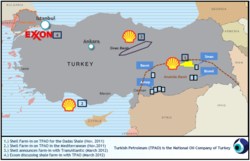 The amount of oil and sheer potential of the Dadas is simply massive. TPAO, Turkey’s national energy company, has an estimated 110 billion barrels of original oil in place in the Diyarbakir Basin where Anatolia’s Bismil and Sinan licences are located.

The Dadas Shale play is similar to other major shale discoveries like the Barnett and Eagle Ford in the United States. Oil produced in Turkey, however, receives much more beneficial pricing in the global oil markets than its North American counterparts. Oil from Turkey and the surrounding regions is priced at Brent Crude pricing which has recently been averaging $20 more per barrel than the West Texas Intermediate benchmark.

The potential of the Dadas is already starting to attract attention from major oil companies including ExxonMobil and Royal Dutch Shell.

Turkey is certainly opening its doors, as the country will gladly welcome any foreign investment that can help unlock the country’s resources and help build its oil and gas industry. Reuters reported in March 2012 that TPAO signed an accord in November for Europe's largest energy company Shell to look for oil and gas in the Mediterranean Sea and onshore southeastern Turkey and said other major international firms were interested in exploring nearby.

Anatolia Energy is right in the heart of the major oil producing Anatolia Basin and holds a large land position of well over 700,000 gross acres with its Turkish partner, Calik Enerji. The company drilled its first well in the area in early 2012 with the results having revealed a lot about the true potential of the Dadas Shale.

Anatolia’s core analysis from the well revealed evidence of the Dadas Shale, which is also referred to as a “super source rock.” That’s a term used to describe the source of oil – often in shale form - of oil underneath some of the largest oil producing regions in the world.

The Dadas Shale is suspected to be the original geological source for the oil reserves in place in over 400 oil fields across North Africa across the Middle East.

Recent discoveries of similar oil shales have been made in the Barnett and Eagle Ford Shales in the southern United States in and around Texas. Both of those discoveries have launched sizable oil booms of their own and have attracted significant investment capital.

The initial excitement of this shale play has been confirmed through TPAO’s recent disclosure of light oil or condensate being tested from the Dadas Shale in a drillstem test in their Ciksor-3 well (TPAO Exploration Department, March 21, 2012, TUROGE Conference, Ankara Turkey). This flow test was conducted in a vertical well from an unstimulated interval in the Dadas Shale and reportedly flowed 19 barrels of 60° API oil. What’s very important about this TPAO result is the well was not fracture stimulated which is an essential step in producing oil from oil shales and it was a vertical well versus the normal horizontal. The oil production was big news and shows the oil contained in the oil may be highly recoverable with fracture stimulation. In addition, TransAtlantic Petroleum tested gas and condensate from its Dadas Shale in their Goksu well.

In addition, just a few days ago Anatolia announced the latest results from its drill core analysis from the five cores extracted from the Dadas Shale formation in the Caliktepe-2 well. The results from the geochemical and reservoir analysis of the Dadas Shale compare favorably with many of the worlds other shale producing resource plays.

Bob Spring, Anatolia Energy’s CEO, said in a recent announcement, “Anatolia Energy management is very encouraged by the recent flow tests which have indicated that unstimulated hydrocarbons can flow freely within the unstimulated Dadas Shale reservoir. The recent entrance by Shell in the basin also solidifies our shale strategy.”

The promising developments have pushed Anatolia forward into the development of this high-potential oil shale play in Turkey. As a result, it expects to have drilled three wells in each of its Dadas Shale prospective licences by this time next year, including one well on the Antep licence which is targeting shale oil in a potential new Dadas Shale basin.

After those wells are drilled, Anatolia plans to move forward with horizontal multi stage fracs. This will give a much better idea of how much oil can be produced from these regions.

Here’s why the numbers are so massive and Anatolia’s sizeable land position in the region could be immensely valuable as the Dadas Shale story plays out.

Furthermore, Turkey’s oil shales would be highly economical under the current fiscal terms laid out by the Turkish government. Turkey has a flat 12.5% royalty on the oil produced and a 20% corporate tax rate, thus putting its fiscal terms amongst the best in the world.
Anatolia Energy trades on the TSX Venture Exchange under the ticker symbol “AEE.” It also has a U.S. quotation under the ticker symbol “BEEHF.”

The company’s current market cap of approximately $13 million (62 million shares outstanding at 22 cents per share) and it has $4.5 million cash on hand.
Learn more about Anatolia Energy at http://www.anatoliaenergy.com.