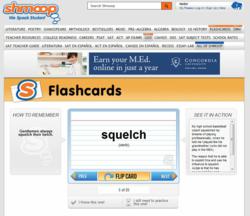 Have trouble committing things to memory? Can’t recall the location of those glasses? Wish the remote control was in its usual spot?

Poring over large blocks of text isn’t always the easiest way to cement facts, dates and definitions in that spongy thought called the brain. Often, repetitive and rapid-fire practice is the way to go. Case in point: just think about how difficult it would be to forget someone who was firing off explosives.

Shmoop, a publisher of digital curriculum and test prep, announces the launch of Flashcards. This tool is available site wide, meaning people can use it to test their English vocabulary, their algebra skills or their mastery of the Harry Potter lexicon. A person can’t expect to get very far in life if she can’t tell her Hippogriff from her Blast-Ended Skrewt.

So if the SAT is fast approaching, or if a student just wants to make sure she remembers this stuff in 20 years, take a gander at Shmoop’s new Flashcards and see if her brain can keep up. For an added challenge, see if it can keep up sans Red Bull.

Shmoop is a digital curriculum and test prep company that makes fun, rigorous learning and teaching materials. Shmoop content is written by master teachers and Ph.D. students from Stanford, Harvard, UC Berkeley, and other top universities. Shmoop Learning Guides, Test Prep, and Teacher’s Editions balance a teen-friendly, approachable style with academically rigorous materials to help students understand how subjects relate to their daily lives. Shmoop offers more than 7,000 titles across the Web, iPhone, Android devices, iPad, Kindle, Nook, and Sony Reader. The company has been honored twice by the Webby Awards and was named “Best in Tech” for 2010 and 2011 by Scholastic Administrator. Launched in 2008, Shmoop is headquartered in a labradoodle-patrolled office in Mountain View, California.