First Ever Google Maps Engine Grant Helps WWF and Eyes on the Forest in Urgent Effort to Save Tigers, Rhinos, Orangutans and Elephants 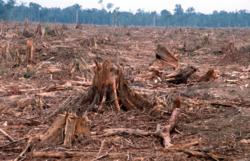 A powerful new mapping tool from Indonesian NGO coalition Eyes on the Forest and World Wildlife Fund (WWF) allows the public to visualize Sumatra’s forests and wildlife such as rhinos, tigers, elephants and orangutan, providing vital information in the race to protect forests, save some of the world’s most important biodiversity and help local communities. The mapping project is one of the first to be awarded a grant by the Google Earth Outreach team to use Google Maps Engine, a platform for hosting, storing and managing map data.

Sumatra is the only place on Earth that is home to elephants, rhinos, tigers and orangutans and its forests are being lost at an alarming rate. As much as 50 percent has been destroyed since 1985, mostly by natural forest clearance for pulp, paper and palm oil production. The map details the shrinking and disappearance of many habitat ranges of the four species over time.

The project will make publicly available a huge and ever growing database of the land cover, land use, land users and biodiversity compiled by many experts over decades of work on the ground in Sumatra. The maps highlight Sumatra’s extraordinary conservation values, the outstanding diversity of its forests, its magnificent wildlife, and the huge carbon stock locked up in its deep peat soils.

“People love maps. So it’s natural that spatial Information is our best tool in saving our last tropical forests. The Eyes on the Forest-Google Maps Engine project puts map-making into our hands so it’s no longer the stuff of specialists,” said Carter Roberts, President and CEO of World Wildlife Fund. “Our conviction is that if we empower people with the information, the forests of Sumatra cannot only be saved, but we can restore them. So instead of rhino, orangutan and tiger numbers getting smaller each year, they get bigger. That’s our dream.”

To learn more about the project and see a video, go to: http://www.google.com/earth/outreach/stories/wwf.html.

Global transparency is key to achieving this dream. Ultimately, this database will show Sumatra’s threats and challenges, identify the drivers of deforestation, habitat destruction and release of peat carbon, which contributes to global warming. Users will be able to build their own maps using Eyes on the Forest’s data layers such as forest loss over time, species distribution, conservation intervention priority areas, restoration priority areas, degraded lands and government protected areas.

“As a grant recipient, Eyes on the Forest can use the cloud-based Google Maps Engine platform to share its forest data with anyone,” said Tanya Birch, Program Manager for Google Earth Outreach. “Non-profit organizations can simply and easily create custom maps that help their data visually come to life by layering that information on top of Google Earth and Maps.”

Sumatra’s forests are being cut by globally operating Chinese and Indonesian conglomerates to feed the world’s massive demand for pulp, paper and palm oil, while species such as tigers and elephants are being pushed into increasingly smaller habitats where they often come into conflict with humans.

The foundation for the project are Eyes on the Forest’s many years of on-the-ground work, WWF's 2010 report "Sumatra’s Forests, their Wildlife and the Climate. Windows in Time: 1985, 1990, 2000 and 2009" and subsequent analyses and contributions by many persons and entities working on Sumatran issues. They have all been collecting data for decades on deforestation, species and forests in order to gain a better understanding of the state of Sumatra’s forests. The new map will help conservationists understand where the deforestation is taking place, the most critical areas for intervention, and where humans and animals such as tigers are coming into conflict – vital knowledge in the fight to save what is left.

“This project is a step forward for Eyes on the Forest as it is a powerful tool to open windows to the world about the devastating destruction happening to forests, particularly on Sumatra Island,” said Muslim Rasyid, Chairman of Jikalahari, a member of the Eyes on the Forest coalition. “We hope that Google will keep updating its satellite imagery library so the world can see the facts of the devastating destruction on Sumatra, who is doing it, and where those forest products end up. Furthermore, we can show this map to decision makers and urge them to protect the remaining natural forests of Sumatra.”

ABOUT EYES ON THE FOREST
EoF is a coalition of three local environmental organizations in Riau, Sumatra, Indonesia : WWF Indonesia's Riau Programme, Jikalahari ("Forest Rescue Network Riau") and Walhi Riau (Friends of the Earth Indonesia). It was launched in December 2004 to investigate the state of Riau''s forests and the players who influence it. EoF has become a clearinghouse for information on forest conservation in Riau, Sumatra and to serve as a tool for local, national, and international NGOs, companies, governments and any other stakeholders who are willing to take action to conserve forests and protect the rights of the local people who rely on them. Visit http://www.eyesontheforest.or.id to learn more.