York has beaten its best ever April performance for company formations by 15%, according to formations experts Duport.co.uk. 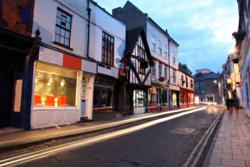 Despite the double-dip recession, York is still brimming with ideas and opportunities for new start ups, and it seems as though the city’s entrepreneurs are taking advantage of them

York: Duport.co.uk have discovered that a new record of 136 start up companies were formed in York in April 2012, using the official Company Register from Companies House. The previous record has been held since April 2009, when 119 new businesses were formed.

This news comes as York also announces a fall in unemployment between March and April, suggesting that people who are out of work are starting up their own businesses.

“Turning a setback into an opportunity is an important skill for any entrepreneur, and it looks as though the people of York have the talent,” said Peter Valaitis, Managing Director of Duport.co.uk.

“Despite the double-dip recession, York is still brimming with ideas and opportunities for new start ups, and it seems as though the city’s entrepreneurs are taking advantage of them.”

York is also hoping to boost its tourist industry, with tourism agency Welcome to Yorkshire teaming up with York’s local enterprise partnership to help support and encourage local businesses in the industry.

With incredible historical sites, such as the spectacular York Minster, and medieval shopping street The Shambles, York has a great deal to offer tourists, and with an increase in tourism, there is always an increase in opportunity for business.

2012 is expected to be a huge year for tourism in Britain, with the London Olympics and the Queen’s Diamond Jubilee bringing more visitors to the UK. But as well as the foreign tourist market, York is also a popular destination for UK visitors, and may even be more popular this summer with Brits trying to escape the hustle and bustle of the south east and London.

With the city’s historical sites and booming new businesses, York could be the best place for visitors and entrepreneurs in 2012.

Duport.co.uk is a leading UK company formation agent, operating in the UK for around 15 years. Duport registers around 10,000 new companies each year using its Companies House approved software. The Company Register which is maintained by Companies House contains public information about Limited companies and directors.