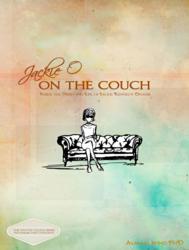 The IBA has declared Jackie O: On the Couch a finalist in Fiction: Historical.

The International Book Awards victory adds to a long list of accolades for Jackie O: On the Couch.

On May 22, when the Los Angeles-based 2012 International Book Awards (IBA) announced the year’s very best books, prominent among the victors was a distinctive work of historical fiction called Jackie O: On the Couch: Inside the Mind and Life of Jackie Kennedy Onassis.

Authored by New York psychoanalyst Dr. Alma H. Bond and published in August 2011 by Baltimore, MD-based Bancroft Press, Jackie O: On the Couch is a first-person “psychobiography” of former first lady and worldwide icon Jacqueline Kennedy Onassis—essentially, according to Bancroft publisher Bruce Bortz, “the story of her life the way she would have told it.”

The function of the IBA, according to their website, is to “honor outstanding books on a global scale.” “Outstanding,” then, would seem to be the verdict on Jackie O: On the Couch, declared a finalist in the category of Fiction: Historical.

“It’s an honor to be recognized by the International Book Awards,” says Bond, who has authored eighteen previous published books. “I’m delighted for my work to be recognized, and I hope it enables more readers to discover the story of the twentieth century’s most fascinating woman.”

Bond is rather fascinating in her own right. After decades in psychoanalysis, Bond was struck by a car, sending her into a coma from which doctors were unsure she would ever recover. When she did, she decided to devote her life primarily to something she had always wanted to do, but never actively pursued: writing.

A woman in her eighties, Bond is almost certainly the oldest honoree among the International Book Awards.

“Alma Bond and Jackie O: On the Couch deserve this award,” says Bortz. “And we’re thrilled and honored to receive it. Jackie O is one of the most fascinating biographies of any sort I have ever read, much less published. It really reads as though Jackie Kennedy Onassis were speaking directly to the reader.”

The International Book Awards victory adds to a long list of accolades for Jackie O: On the Couch. Jackie O also won the North American Bookdealers Exchange (NABE) Pinnacle Book Achievement Award in the category of Historical Fiction, and was declared the “Most Surprising Book (In a Good Way) of 2011” by prominent literary blog Bibliophilia.

Those wishing to read IBA-finalist Jackie O: On the Couch: Inside the Mind and Life of Jackie Kennedy Onassis will find it in bound and e-book form at Amazon.com, Barnes & Noble, and wherever books are sold.