Innovative indie publisher, Curiosity Quills Press, introduces the fruits of its Winter recruitment drive, in the form of several new titles coming throughout the year 2012. 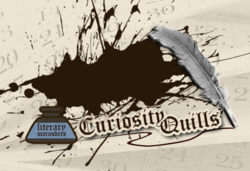 Readers look to flexible, innovative small press like Curiosity Quills to help navigate the torrent of newly published works. We are extremely proud of our authors and stand behind them one hundred percent.

Following several months of active acquisition, innovative literary publishing house Curiosity Quills Press is pleased to announce an expanded fiction offering for the last quarter of 2012 and into 2013.

The press has until now focused on speculative fiction, with a strong roster of science-fiction, urban fantasy and paranormal authors, including the likes of Richard Roberts ("Sweet Dreams Are Made of Teeth", "Quite Contrary"), Matt Howarth ("Toofer"), Sharon Bayliss ("The Charge"), K.H. Koehler ("The Devil You Know"), Amy Fecteau ("Real Vampires Don't Sparkle"), Andrew Buckley ("Death, The Devil & The Goldfish"), Johanna Pitcairn ("Death by Chocolate"), Grace Eyre ("Prolongment"), as well as the trio of NaNo-Virtuosos Competition winners, Courtney Worth Young (After the Woods), Thea Gregory (Sanity Vacuum), and Trudy Dillard (Cell Hell).

In addition to these exciting newcomers, several existing authors return with new titles for Curiosity Quills fans. "Shadow of a Dead Star" author, Michael Shean, continues the Wonderland trilogy with part two, "Redeye", due in September, while serialized novel "Bone Wires" is available free on the website for just a few more months before being published in full in print. Nina Post, Vicki Keire, Krystal Wade and Michael Panush also all have additional titles planned for release before the end of the year.

Also lined up for the fourth quarter of 2012 is a new literary fiction imprint for the publisher, with Xan Nyfors bringing a frontrunner five-book deal ("House of Dust", "Walk Out a Mean Free Path", "Transformation Bound", "Deadly Othello", "Charlie's Truth"), along with David Scott Hay's "The Fountain", and the deeply evocative Russian import, Elena Kriukova's translated three-book set - "Red Moon", "Shadow of an Arrow", and "Eden: The Banished".

Marketing director, Lisa Gus, has this to say about the bountiful wave of acquisitions:

"Traditionally the Big Six of publishing have been tasked with serving as a gateway between writers and book lovers, but with the Amazon Kindle taking its place in what's now the Big Seven, readers look to flexible, innovative small press like Curiosity Quills to help navigate the torrent of newly published works. We are extremely proud of our authors and stand behind them one hundred percent."

Although the signing of these titles concludes Curiosity Quills Press’s major acquisition drive, the press is always open to the exceptional. Details can be found on the company’s submission guidelines page.

Curiosity Quills Press (http://curiosityquills.com), launched in June, 2011 by writers, for writers, out of a common frustration with the state of publishing today. Instead of relying on readers to sift through the so-called “Amazon slush-pile,” CQ presents a uniformly top-notch level of quality, tastefully curated, hard-hitting storylines, and memorable characters readers won’t forget amidst their Kindle downloading sprees.

We know it’s hard to stand out from the crowd when it’s millions large, but Curiosity Quills Press helps level the playing field through its members’ innovative social media approach, a transparent culture, and a deeply passionate team.