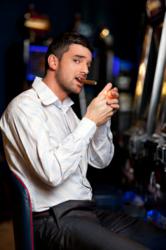 "Young people love cigars for the same reason older people do: they taste great; they smell great; and they offer an ideal way to relax and unwind after a stressful day."

Many people associate cigar smoking with older Americans; however, recent statistics suggest that younger men are taking up the hobby. According to a recent government survey, eleven percent of 18- to 25-year-olds said they had enjoyed at least one cigar during the previous month, compared to only 5 percent of all other age groups.

According to Brian Pyatt, President of BnB Tobacco, these statistics aren't a big surprise.

“We really get to know our customers through social media platforms, such as Google+, Facebook and Twitter," he said. "Based on this communication, we can tell that many young men in their 20s are discovering the pleasure of a great cigar.”

While it's not clear why so many younger adults are becoming cigar enthusiasts; many suspect that celebrity culture could have something to do with it. For years, celebrity icons, such as Bill Murray, Arnold Schwarzenegger, Gene Hackman and John Travolta, have enjoyed stogies while posing for magazines and appearing in public. Now, a new generation of Americans is seeing actors and actresses their own age doing the same.

Although many believe celebrity influence may be inspiring a new generation of cigar lovers; Pyatt believes the reasons are far simpler.

"Young people love cigars for the same reason older people do," he said. "They taste great; they smell great; and they offer an ideal way to relax and unwind after a stressful day."

Even though younger generations may enjoy cigars for all the same reasons older ones do; they don't necessarily smoke the same brands. According to Pyatt, his company has seen specific brands take off, thanks to the rising popularity of cigars among young adults.

"Right now, our top selling brand of premium cigars is Acid, which is really popular among the younger crowd,” he said. "That said, we also sell a high volume of other brands, such as Alsbo, Bella, Camacho; and, of course, Cohiba cigars are as popular as ever."