Diamond Cutters International honors both quantum physics creator and Rubik’s Cube inventor with Rubik’s Masterpiece to celebrate the 40th anniversary of the Rubik’s Cube, the world’s best-selling puzzle, as part of a major international exhibition at the Liberty Science Center. 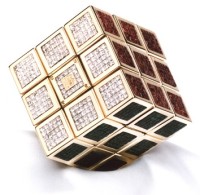 Diamond Cutters International is honoring the 40th anniversary of the iconic Rubik's cube, the best-selling puzzle, in a major international exhibition at the Liberty Science Center of the Rubik's Masterpiece.

As a young physics student in 1874, Max Karl Ernst Ludwig Planck, wanted to understand how matter moved through time and space. In a speech presented in Florence, Italy in 1944, titled Das Wesen der Materie [The Nature of Matter], the German-born physicist said, “The mind is the matrix of all matter.” Little did Planck know he was doing more than explaining the beginnings of quantum theory; he was setting the stage for what would become one of the most widely enjoyed and studied toy puzzles in history. One hundred years after Planck began his pursuit of understanding quantum mechanics, a young Hungarian inventor, architect and professor of architecture, Erno Rubik invented the Rubik’s Cube, a perfect model of Planck’s simple statement. Fifteen years further removed, another craftsman, this time in diamonds, precious stones and metals, Fred Cuellar, founder and CEO of Diamond Cutters International (DCI), created what was to become known as the Rubik’s Masterpiece, or as the Guinness Book of World Records refer to as, “World’s Most Expensive Toy.”

From a simple quote, to an inventor’s goal to be able to physically place a working model of that concept in a person’s hands, to one artist’s desire to create a version as beautiful as the complexity of the universe, the Rubik’s Cube and its $2.5 million counterpart the Rubik’s Masterpiece, have entertained, enthralled and enraptured people around the world. Today, in cooperation with the Liberty Science Center (LSC) in Jersey City and Google, a major exhibit celebrating the Rubik’s Cube is being developed to open April 2014 at the LSC before traveling around the world to various art museums, science centers, and alternative exhibit spaces for up to seven years.

“Erno Rubik was able to make the complex adapted system, which Plank was describing, into a toy, essentially placing the universe in our hands,” says Cuellar of Rubik’s invention. “When I first saw his plastic toy I thought to myself, this is far too incredible a puzzle; it needs to be made of the finest most precious material. I had to honor Rubik and ultimately Planck, using my own skills and talents, so I created the Rubik’s Masterpiece.”

So impressed was Rubik when he first held his namesake masterpiece in his hands that he said of Cuellar’s version of his puzzle, “This is my Mona Lisa.”

Cuellar’s Rubik’s Masterpiece will be the centerpiece of the 40th anniversary exhibit. Valued at over $2.5 million, the fully functioning Rubik’s Cube required 8,500 man hours to be crafted in 18 karat yellow gold with 25 precious stones per panel set in invisible settings. Cuellar used 185 carats of rubies, emeralds, sapphires, and white diamonds to create the classic colored panels of the Rubik’s Cube puzzle with one small difference. While the original Rubik’s Cube is colored red, green, blue, orange, yellow, and white, Cuellar—himself a lover of puzzles and codes—decided to replace orange with purple for a variety of reasons both clever and protective.

The color purple has historically represented royalty due to the fact that in ancient times it was the most difficult, and thus most precious color to create. Only kings and monarchs were allowed to wear purple and to this day it still represents this regal and noble class.

Secondarily, Cuellar wanted to honor both Planck and Rubik, and the color purple allowed him to do this through a clever use of an acronym. The ‘pu’ stand for Planck’s universe, while the ‘rp’ represent Rubik’s puzzle, and finally ‘le’ stand for light energy, which is ultimately what Planck and Rubik each had a desire to understand.

No photograph has ever been taken of the purple side of the Rubik’s Masterpiece, and until now, this design change has not been publicized, to eliminate the risk of others creating replica versions of Cuellar’s incredible work. But with its inclusion in the upcoming exhibit, Cuellar decided it was time to reveal the truth.

“We are excited to be a part of this incredible exhibit,” says Cuellar, “and to be able to share our creation with not only the guests of the Liberty Science Center but ultimately the world.”

The interactive Rubik’s Cube Exhibition will explore the interplay of design, engineering, mathematics, and creativity. In addition to DCI’s spectacular creation, the exhibition will include elaborate Cube artwork; Cube-solving robots; virtual reality simulations of Cubes that aren’t really there; a glowing 35-foot-tall Rubik’s Cube that can be manipulated by anyone with an Internet connection; and a tiny nanoscale Cube.

“Rubik’s Cube has stood the test of time,” says LSC CEO Paul Hoffman, “and yet remains on the leading edge of innovation. Not a week goes by without somebody—an architect in Turkey, a musician in China, a mathematician in Moscow, or a roboticist in Japan—using the Cube in an ingenious new way.”

About Fred Cuellar, the Diamond Guy®
Having once been unable to afford to purchase a diamond ring for his bride-to-be, Fred Cuellar set out to learn all he could about the diamond business and in so doing has become one of the world’s leading experts. He is the founder of Diamond Cutters International (DCI) where Fred’s industry pioneering work in diamond corresponding grading and bonding have not only revolutionized the diamond industry but has made DCI one of the world’s top diamond cutting, design, importing and sales organizations with a client list that reads like a who’s who of world political leaders, celebrities and championship sports organizations, including President Barack Obama and First Lady Michelle, President George W. Bush and First Lady Laura, the Saudi Royal Family, Erno Rubik, Oprah Winfrey, the Dallas Cowboys, the Denver Broncos, the Detroit Red Wings, the New York Yankees, David Beckham with the LA Galaxy and more.

To assist others that suffer from the same plight that he once did, Fred launched MyGemologist™ program and the philanthropic Adopt A Diamond™ program, as well as authored “How to Buy a Diamond,” now in its seventh edition and the number one selling book on diamonds in the country. Fred was also instrumental in developing a number of purchasing techniques, including “buying shy,” that have help saved thousands of dollars for buyers and increased sales for the diamond industry worldwide. Fred’s tireless work has benefited not only the diamond industry but diamond buyers.

About Liberty Science Center
Liberty Science Center is a 300,000-square-foot learning center located in Liberty State Park on the Jersey City bank of the Hudson near the Statue of Liberty. Liberty Science Center (LSC.org) is dedicated to bringing the excitement of science to people of all ages, Liberty Science Center houses seven museum exhibition halls, a 3D theater, the nation’s largest IMAX® Dome Theater, live simulcast surgeries, tornado and hurricane-force wind simulators, K-12 classrooms and labs, and teacher-development programs. 600,000 students, teachers, and parents visit the science center each year, and tens of thousands more benefit from the center’s off-site and online programs.