3 Ways to Mark the War of 1812 Bicentennial along the St. Lawrence River on June 18

The St. Lawrence River was the British lifeline during the War of 1812. Had the Americans taken the River, Upper Canada would have fallen. To commemorate the region's strategic importance during the conflict, three unique events will mark the 200th anniversary of the declaration of war on June 18, 2012. 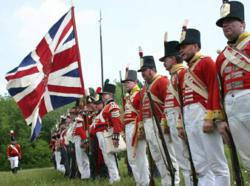 Sometimes the quietest places are the most important.

While those living along the St. Lawrence River during the War of 1812 experienced numerous raids (on both sides), there were relatively few battles fought here - at least when compared to other regions.

Yet the St. Lawrence river was all that prevented the United States from conquering Upper Canada.

As historian and author Lieutenant-General Jonathon Riley explains, "every man and woman, every ounce of food, every ounce of powder and shot, every letter, every instruction form London, every newspaper, everything had to be brought down the St. Lawrence on boats or portage. Let’s not forget that’s no mean undertaking, it’s as far from Halifax to Amherstburg as it is from Paris to Moscow.”

Renowned 1812 historian Donald Graves agrees, "If that jugular had been cut at any one time during the war, everything west of Cornwall would have withered on the vine and died. It was a really, really important strategic factor that Britain kept the St. Lawrence open."

To commemorate the strategic importance of the St. Lawrence during the War of 1812, three communities are hosting unique events to mark the declaration of war on June 18.

The Canadian Fencibles will lead a War of 1812 veteran grave marking ceremony in six communities beginning at the McDowall Memorial Cemetery in Sandhurst at 9:00 AM.

An opening presentation of colours will take place at each cemetery with music by the Loyalist Fifes and Drums.

Closing the 200th anniversary of the declaration of war, Fort Henry will host a Commemorative Period Banquet at 6:00 PM. Experience a true Georgian banquet in the officers dining rooms served by soldier servants. The Cost is $65 per person with port service. Contact 613.530.2550 for reservations.

Commemorative events will continue along the St. Lawrence River throughout the Bicentennial, including a reenactment of the Battle of Crysler's Farm July 13-14, 2013 and culminating in a Victory Ball in February 2015 in Kingston.