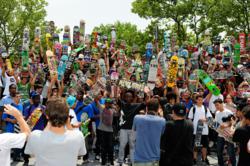 The International Association of Skateboard Companies (IASC) is proud to announce the annual international holiday, Go Skateboarding Day, slated to take place on June 21, 2012. The worldwide celebration serves to get skaters out en masse for a day solely dedicated to doing what they love to do – skateboarding.

This year, Go Skateboarding Day takes on a new direction with IASC’s Just One Board recycling initiative. The program collects and refurbishes used but functional skateboard equipment, re-assembles it with the help of local skateshops and distributes the complete skateboards to local community organizations for underprivileged youth.

Just One Board, in partnership with the Lower 9th Ward Village, the Tony Hawk Foundation, the Make It Right Foundation, Humidity Skate Shop and Urban 9 Skateshop, will distribute 1,000 completed skateboards to kids in New Orleans Lower 9th Ward neighborhood in honor of the holiday. Following the giveaway there will be a group skate from the Lower 9th Ward Village to Dr. Martin Luther King, Jr. Charter School for the groundbreaking of the first eco-skatepark in New Orleans, which is scheduled to open Aug. 29, the 7-year anniversary of Hurricane Katrina.

“With family in New Orleans, I got to witness firsthand the devastation wreaked by Katrina. The chance to launch the Just One Board program on Go Skateboarding Day in the Lower 9th Ward, a community that is embracing green initiatives and skateboarding with the creation of the first skatepark in NOLA, is incredible,” said Josh Friedberg, Executive Director of IASC.

The big giveaway on GSD will be held in a different city each year, but the vision for the program is that skateshops around the world will implement Just One Board on a smaller scale year-round. By collecting used skateboard equipment, refurbishing and distributing it with the help of local skateshops and youth organizations, used equipment is saved from becoming environmental waste, shops gain a direct opportunity to support their community, youth organizations can introduce healthy skateboarding activities into their programs, and most importantly, young people who wouldn’t otherwise have the opportunity are given the chance to learn a new skill that gives them a healthy outlet and instills important character traits that last a lifetime. Just One Board partnered with I Ride I Recycle http://irideirecycle.com/ to create collection bins for shops to raise awareness of the recycling programs and as a tool to engage their local communities all year long.

“When I was thirteen, all it took was just one board to show me what I wanted to do for the rest of my life,” said Friedberg. “The opportunity to give used equipment a second life and thousands of kids a chance to experience the world through skateboarding at the same time is a beautiful thing.”

Go Skateboarding Day began as a small group of colleagues skating to the Huntington Beach Pier in California and has grown into a global phenomenon. Last year, millions of skateboarders participated in more than 500 events held worldwide.

In 2008, the first collectable GSD poster was introduced as a way to bring more awareness to Go Skateboarding Day. Posters are designed each year by well-known artists and professional skateboarders and in the past have included, Ed Templeton, Steve Caballero, Shepard Fairey and Jim Phillips. This year’s Go Skateboarding Day poster was designed by street skateboarding pioneer Natas Kaupas. A limited number of posters and prints are available for sale online with all proceeds going to support the Go Skateboarding Foundation, a 501(c)(3) non-profit corporation.

For more information and to find local GSD events, visit Facebook http://facebook.com/goskateboardingday. Follow GSD on Instagram @goskateboardingday and use the hashtag #GSD2012 to let the world know what you’re doing for Go Skateboarding Day!

About Go Skateboarding Day
Go Skateboarding Day, held June 21st of every year, is the official holiday of skateboarding. Event locations are disclosed at local skate shops and on http://facebook.com/goskateboardingday, where you will also find info on how to create your own event, fundraiser or rally and more. While the holiday grows, the mission remains the same: Go skateboarding and have fun!

2012 Just One Board Assembly