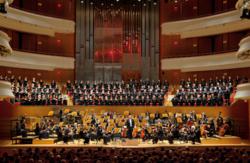 The singers of the Chorale will also appear as guest artists in three concerts presented by Pacific Symphony, including Handel’s “Messiah” with John Alexander conducting, Mozart’s Requiem, and Puccini’s “Tosca,” the second semi-staged opera presentation in the “Symphonic Voices” initiative. Pacific Chorale’s annual Choral Festival will return in August 2012, bringing together choral singers from the Southern California community and beyond in a free public performance of choral masterworks.

ABOUT PACIFIC CHORALE’S CHORAL FESTIVAL
On Sunday, August 12, 2012, at 5:00 p.m., members of Orange County’s choral community will join Artistic Director John Alexander and members of Pacific Chorale in a performance in the Renée and Henry Segerstrom Concert Hall at Segerstrom Center for the Arts. Organist Jung-A Lee returns, having performed the Duruflé Requiem at last year’s Festival, to accompany the assembled singers as well as playing several solo works on the William J. Gillespie Concert Organ. The performance will be free and open to the public.

Registration for the Festival Chorus is available online at http://www.pacificchorale.org, or by calling Katherine Yang at (714) 662-2345.

Pacific Chorale’s Choral Festival is presented by the Shanbrom Family Foundation in association with Segerstrom Center for the Arts.

Bass-baritone Eric Owens, who garnered glowing reviews for his portrayal of Alberich in the Metropolitan Opera’s recent production of Richard Wagner’s “Der Ring des Nibelungen,” assumes the title role of the prophet Elijah in Felix Mendelssohn’s oratorio. Pacific Symphony joins Pacific Chorale for this presentation of one of the most dramatic and enduring oratorios of the nineteenth century. Based on the stories told in the biblical books of I and II Kings, “Elijah” relates the prophet’s heroic struggle against the corrupt King Ahab and wicked Queen Jezebel for the soul of a nation. The performance will also feature soprano Janai Brugger, a member of Los Angeles Opera’s Domingo-Thornton Young Artist Program and a recent winner of both the Metropolitan Opera National Council Auditions and the 2012 Operalia competition in March and June of this year, respectively.

Over the past three years, Pacific Chorale’s professional chamber choir has established a new choral music tradition for the holiday season in Orange County. “Christmas with the John Alexander Singers” presents traditional carols, both familiar and obscure, in fresh and innovative arrangements by many of today’s leading composers. This year the John Alexander Singers are joined for their concert by guest artists Mindy Ball and Jessica Pearlman, respectively the principal harpist and oboist of Pacific Symphony.

Irish folk song and dance encapsulates the spirit of the St. Patrick’s Day weekend, performed by the John Alexander Singers in collaboration with a band of Celtic instruments and the dancers of A Gaelic Gathering.

THE MOON, THE SEA AND THE STARS
Saturday, June 1, 2013 at 8 p.m.
Concert preview at 7 p.m.
Renée and Henry Segerstrom Concert Hall

Southern California composer Frank Ticheli has enjoyed a warm and fruitful relationship with both Pacific Chorale and Pacific Symphony, acting as the Symphony’s Composer-in-Residence and fulfilling several a cappella commissions for the Chorale. “The Moon, the Sea and the Stars” marks the premiere of Ticheli’s first work to feature both organizations, “The Shore,” a symphonic song-cycle on texts by poet David St. John. Artistic Director John Alexander has programmed other works inspired by rivers, seas, and the night skies to complement the new work, including Ralph Vaughan Williams’ glowing “Serenade to Music” on text from William Shakespeare’s “The Merchant of Venice.”

TICKET INFORMATION
Subscriptions for Pacific Chorale’s 2012-2013 season are currently available through the Chorale’s ticket office, (714) 662-2345 and online at the Chorale’s website, http://www.pacificchorale.org. The ticket office is open 9 a.m.–5 p.m., Monday–Friday. Until single tickets go on sale to the general public on August 13, tickets are available as subscription packages only. Subscriptions are offered in four packages: the three-concert Center Series at Renée and Henry Segerstrom Concert Hall, the three-concert John Alexander Singers Series, the four-concert Grand Chorale Series, and the six-concert Connoisseur Series. Patrons can also contact the Pacific Chorale office directly to create their own custom three-, four- or five-concert Flex Series package.

ABOUT PACIFIC CHORALE
Founded in 1968, Pacific Chorale is internationally recognized for exceptional artistic expression, stimulating American-focused programming, and influential education programs. Pacific Chorale presents a significant performance season of its own at Segerstrom Center for the Arts and is sought regularly to perform with the nation’s leading symphonies. Under the inspired guidance of Artistic Director John Alexander, Pacific Chorale has infused an Old World art form with California’s hallmark innovation and cultural independence.

Pacific Chorale has a membership of 140 professional and volunteer singers. Ensembles of various sizes are selected from the membership according to the needs of the repertoire. In addition to its long-standing partnership with Pacific Symphony, the Chorale has performed with the Los Angeles Philharmonic in Disney Hall on numerous occasions. Other noted collaborations include the Hollywood Bowl Orchestra, the Boston Symphony, the National Symphony, and the Long Beach, Pasadena, Riverside and San Diego symphonies. John Alexander and the Chorale have toured extensively in Europe, South America and Asia.

ABOUT JOHN ALEXANDER
Artistic Director of Pacific Chorale since 1972, John Alexander is one of America’s most respected choral conductors. His inspired leadership both on the podium and as an advocate for the advancement of the choral art has garnered national and international admiration and acclaim. In his long and distinguished career Alexander has conducted hundreds of choral and orchestral performances in 27 countries around the globe. Noted as a specialist in conducting the choral/orchestral masterworks, he is also a strong proponent of American music, programming groundbreaking works by California composers and bringing numerous West Coast and world premieres to Southern California performance halls. Choruses prepared by John Alexander have performed under many of the most renowned conductors on the world stage, including Esa-Pekka Salonen, Seiji Ozawa, Leonard Slatkin, Zubin Mehta, Pierre Boulez, Lukas Foss, Keith Lockhart, John Mauceri, Michael Tilson Thomas, Gustavo Dudamel, Carl St.Clair, Bramwell Tovey, Marin Alsop, John Williams, JoAnn Falletta, Sir Andrew Davis, Nicholas McGegan, Ivor Bolton, Ludig Wicki, Gerard Schwarz and Max Rudolf.