Plight of 10,000 captured LTTE fighters: A UN sequel to Rwanda?

Just over a week prior to World Refugee Day 2012, damning evidence of grave human rights abuses, and war crimes committed against captured members of the Liberation Tigers of Tamil Eelam (LTTE) by Sri Lankan security forces came to light. On June 9, 2012, this was brought to the attention of the Ministry of Refugees, IDPs, and POWs of the Transnational Government of Tamil Eelam (TGTE). 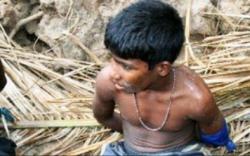 There are scenes of children in LTTE uniforms, and rebels sitting cross-legged on the jungle floor with their hands bound behind them.

"June 20th, 2012 will mark the 61st anniversary of the creation of the United Nations Refugee Agency, UNHCR," according to UN Democracy. "While the world celebrates the achievements of the UN's work for refugees, internally displaced persons, and prisoners of war (POWs) globally, the plight of captured Tamil fighters in Sri Lanka remains a mystery.

A week prior to World Refugee Day 2012, damning evidence of grave human rights abuses, and war crimes committed against captured members of the Liberation Tigers of Tamil Eelam (LTTE) by Sri Lankan security forces came to light. On June 9, 2012, this was brought to the attention of the Ministry of Refugees, IDPs, and POWs of the Transnational Government of Tamil Eelam (TGTE). Many of these photos have been handed over to the Canadian National Post, where they reported that “over two dozen photographs and 32 video clips surfaced from a Sri Lankan soldier’s cell phone, dated between April 6 and May 19, 2009, showed wounded rebel captives and rows of bodies in uniform and civilian clothing.

Amongst the surfaced footage were of women’s bodies stripped naked. There were scenes of children in LTTE uniforms, and rebels sitting cross-legged on the jungle floor with their hands bound behind them. There are bodies wrapped in plastic in the aisle of a bus. In the last videos and photos, dozens of dead are lying face up in a field. Almost all the women’s breasts and genitals have been deliberately exposed. They include Charles Anthony, a rebel commander and Prabhakaran’s eldest son. A few are clearly toddlers.”

“One of the most neglected conflicts in the world has produced a mass exodus of injustice meted out upon the victims of South Asia’s longest ‘civil war,' with the lack of credibility of the international community’s recognition of the treatment Tamil Prisoners of War (POWs),” explained the TGTE Ministry. “Well over 10,000 combatants were captured upon surrendering after assurance from the United Nations and the President of Sri Lanka Mahinda Rajapaksa’s. Many, including those of the Tiger leadership and their families were gunned down in cold blood when they came out with white flags. Numerous LTTE cadre men and women were then tortured, raped, and extra judicially executed, including those as young as 14 years,” reported Human Rights Watch.

The TGTE Ministry went on to state that “captured LTTE fighters have not been granted POW status, though they are protected under international law.” According to the International Committee of the Red Cross (ICRC), “The Third Geneva Convention relative to the Treatment of Prisoners of War, Article 3 (section 1) states that:

“Persons taking no active part of hostilities, including members of armed forces who have laid down their arms and those placed hors de combat by sickness, wounds, detention, or any other cause, shall in all circumstances be treated humanely... To this end the following acts are and shall remain prohibited at any time and in any place whatsoever with respect to the above-mentioned persons: (a) violence to life and person, in particular murder of all kinds, mutilation, cruel treatment and torture.

This law also extends to proscribed organizations as explained by the ICRC that, “according to Article 4 A. (sections 2 and 3) of the Geneva Convention, prisoners of war, in the sense of the present Convention, are persons belonging to one of the following categories, who have fallen into the power of the enemy:

(2) Members of other militias and members of other volunteer corps, including those of organized resistance movement, belonging to a Party to the conflict and operating in or outside their own territory, even if this territory is occupied provided that such militias or volunteer corps, including such organized resistance movements, fulfill the following conditions:

(3) Members of regular armed forces who profess allegiance to a government or an authority not recognized by the Detaining Power.”

The TGTE Ministry also stated that Sri Lanka is not exempt from adhering to international law prohibiting torture of captured combatants. According to the United Nations Treaty Collection, “on January 3, 1994 Sri Lanka became a signatoree to the United Nations Convention Against Torture and Other Cruel, Inhuman or Degrading Treatment. This was originally adopted by the General Assembly of the United Nations on December 10, 1984 (resolution 39/46) and was enforced on June 26, 1987. The definition of torture in Article 1, paragraph 1, of the Torture Convention states that:

Any act by which severe pain or suffering, whether physical or mental, is intentionally inflicted upon a person for such purposes as obtaining from him/ her a third person information or a confession, punishing him/ her for an act he/she or a third person has committed or is suspected of having committed, or intimidating or coercing him/her or a third person, or for any reason based on discrimination of any kind, when such pain or suffering is inflicted by or at the instigation of or with the consent of acquiescence of a public official or other person acting in an official capacity…”

The TGTE Ministry has been working on getting the rights of the captured LTTE fighters recognized by the international community. Deputy Minister Alex Doss, also a disabled veteran of the United States Navy stated that he, "brought this to the attention of US Senator Robert Casey since he was a part of the a Senate Foreign Relations Committee hearing on Sri Lanka that took place on February 24, 2009. During that hearing, the Senator voiced his concern on the human rights situation in Sri Lanka between the two warring parties, and of his strong disapproval of the 'use of child soldiers as young as 14 by the LTTE, and of his concern for their lives being at risk.' Deputy Doss urged the Senator to show the same concern he had prior to May 2009. However, to date, the Senator has not responded, nor has he made any efforts in his legal support for the captured LTTE fighters."

“It almost seems impossible for the United Nations to comply with the Geneva Conventions with regards to certain situations, where the parties involved with the May 18th, 2009 massacre were are currently members themselves of this international body, ” stated the TGTE Ministry. TamilNet reported that, “UN Chief of Staff Vijay Nambiar was telephoned by the leadership of the LTTE who ended up being massacred.” On February 24, 2012, Vijay Nambiar was asked to explain his role in the ‘white flag’ killings. Secretary Ban Ki-moon’s deputy spokesman insisted that Nambiar would not answer the question. The Inner City Press followed Nambiar who stated that he had problems with them saying he was involved in genocide.” The Inner City Press further stated that, “Nambiar told them that reporter Marie Colvin urged him to go to witness the surrenders at the request of the LTTE leadership, and that he contacted US Diplomat Robert Blake to go. He could not because he was blocked by the Sri Lankan government from going.” When asked why he hadn’t spoken out on this, Nambiar avoided the question."

According to Salem News, “the Inner City Press asked the UN how they could accept as a UN Senior Advisor on Peacekeeping Operations General Shavendra Silva, whose Division 58 is repeatedly named in connection with war crimes in Secretary General Ban Ki-moon’s Panel of Experts report on Sri Lanka.” The TGTE Ministry stated that “there still remains a lot of ‘shadiness,’ from within the UN itself as to what its role was with the “LTTE white flag surrender on May 18th, 2009,” as quoted Human Rights Watch.

The TGTE Ministry stated that, "we plan to take the plight of the LTTE captured fighters forward, and shall continue to do so until their rights have been established and recognized as POWs." The Ministry further stated that “the United Nations and its members have a moral and legal responsibility to protect and ensure that captured LTTE members be treated according to the Geneva Convention Relative to the Treatment of Prisoners of War. They along with the international community have an obligation to uphold the very laws they created 60 years ago, otherwise this will go down in history as a sequel to their negligence on the Rwandan Genocide.”

Painting depicting the May 18, 2009 surrender of the LTTE Leadership - artist Shan Sundaram